The View From Section 326, Target Field

Ted gets an opportunity to visit baseball's best stadium for the first time. These are his impressions.

Share All sharing options for: The View From Section 326, Target Field

Recently, as in last night, I had an opportunity to see my first game at Target Field, and it more than likely will be the last one I see there in a long time.  Living in St. Louis doesn't afford me the opportunity to come to the hometown, but a business trip gave me an opportunity to check out the stadium.

I was able to get a cheap seat ticket for $20, pretty reasonable.  My first order of business was to figure out how to get to the stadium, and I quickly decided on the Hiawatha Light Rail.  Since I'm staying in Bloomington, I got on at the Mall of America, and enjoyed the 45 minute ride to the stadium.  It's ironic, in many ways, that the location of the first Twins stadium was the place that I went to to get to the newest Twins stadium.  And yeah, I took the obligatory picture of the Minneapolis skyline as it came into view: 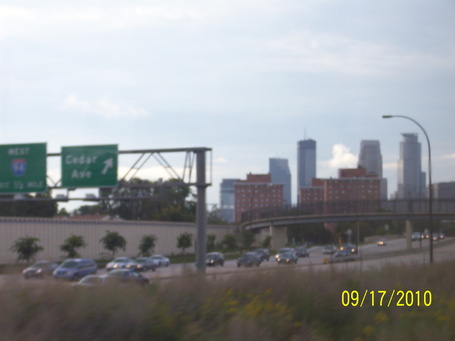 One bit of advice if you're going to a Twins game:  DON'T DRIVE.  Traffic in Minneapolis is horrible.  Take public transportation.  The Hiawatha Light Rail is safe, cheap, and it makes going to the game SO much easier.  When I got off the stadium, I was absolutely amazed at how great Target Field looks from the outside, with the Limestone and banners flying: 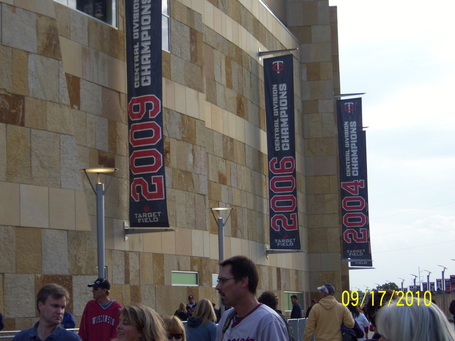 From there, I walked around the stadium and entered at the gate closest to Hrbek's.  Hrbek's is a tribute to hometown hero Kent Hrbek and the Twins teams of the late 80's and early 90's.  There were a lot of people there, so if you want to hang out at Hrbek's before the game, give yourself plenty of time.  That said, I was able to share a table with a nice couple, and we chatted for a few minutes while I waited for my beer.  Anecdotally, it was the first time that I had heard 'I was against them building this stadium, but this is SO much better than the dome.  I'm glad it was built.'  I heard that 100 times if I heard it once.  Are you listening, Minnesota Vikings? 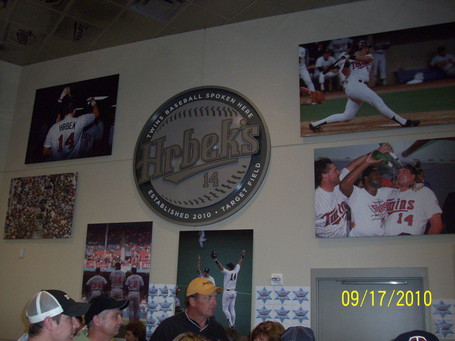 From there, I made my way onto the main concourse and chatted with the attendant who guarded the Gate to entering the lower deck behind home plate.  A nice guy, and he told me about the original Met Stadium flagpole that was out in right field, and was a fan at the game the night Jim Thome hit the longest Target Field home run off said flag pole.  For those that didn't know, after Met stadium was torn down, the flagpole stood proud over my hometown VFW (Richfield) until they donated it to Target Field.  Before each home game, a veteran that lives in Twins Territory raises the American flag.  Last night, it was two brothers that had both served in Vietnam.  Very, very cool ttribute to America's veterans.  The Twins flag is raised by a Twins fan as the Twins take the field. 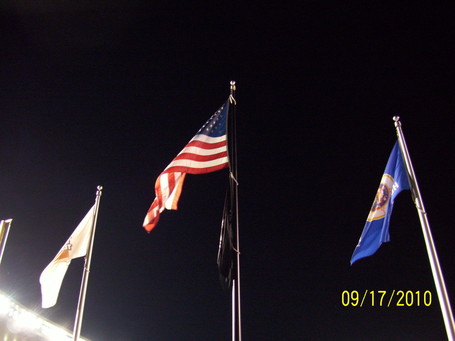 I made my way up to section 326, and after I met my Sherpa guide at Hrbek's, we made our ascent.  We stopped for beer oxygen once we got off the escalator, and I knew I was home when I heard the beer man yelling '"GRAIN BELT BEER HEEAH, GETCHA A NIIIIICE COLD GRAIN BELT!!".  I couldn't bring myself to do it, but I did get a Lenenkugel's Honey Weiss, which was on tap.  Major bonus.  Once I settled in my seat, the view of the skyline is just stunning.  This ballpark was done right, and seeing the skyline so close was just beautiful: 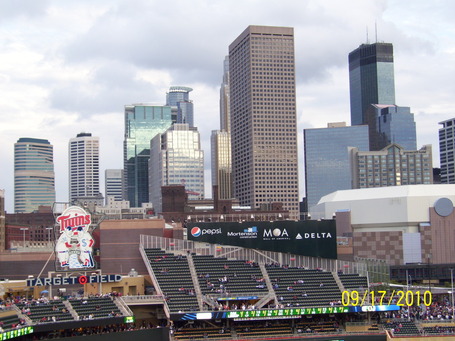 So, the game gets underway, and even though I had the cheapest ticket in the park, it was a good view, albeit a ways away from the field.  I don't think there's a bad seat in Target Field, and I wanted to walk around and prove it to myself, so off I went.  From the second deck concourse, I started walking around, checking the view, and I stumbled across the Twins Pub, right behind home plate.  At first, I thought it was an exclusive ticket only suite...BUT NO!!!  ANYONE CAN GO IN THERE!!  SO I walk in, find an open spot next to the glass, and watch the game from direcly behind home plate...right next to Sue, the lady who plays the organ jingles for the Twins!  IT'S THE COOLEST THING EVER: 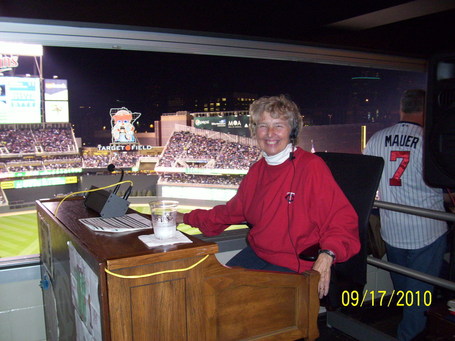 From there, I made my way down to the Target Field Plaza over in right field and noticed the plaque for the flagpole, which was pretty cool.  Chatted with a few more folks while I was in the stadning room only section, and all five or six folks love the ballpark and don't miss the Metrodome at all.  I made my way over to the beer guy that SELLS BLUE MOON ON TAP...holy crap, this stadium has awesome beers, and I was forced to buy one.  The food is good, too.  I had the obligatory hot dog with saurkraut and onions, but you can get nachos, burgers, chips, even walleye.  Great selection, and there are plenty of vendors on every level of the stadium.  If you go hungry at Target Field, it's your own fault.  From there, I headed around the stadium again, checking out all the sightlines, and they're all awesome, even the standing room only areas.   Other than some outfield seats, the scoreboard can't be missed.  It's huge, it's HD, and I want it in my basement.  It shows replays, and has the score, lineup, count, everything.  Just fantastic: 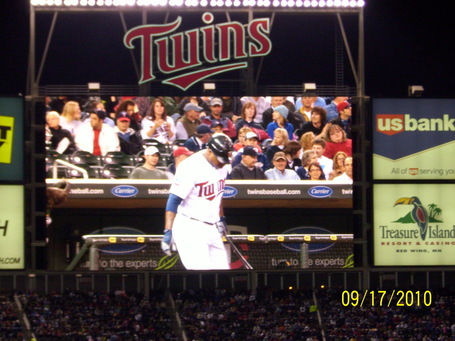 One thing about Target Field:  Dress warm.  It got into the 40's last night, and as the sun went down it got noticeably colder.

Oh, the score?  The Twins lost to the A's, 3-1.  But the people of Minnesota are the big winners.  Fantastic stadium to go along with a fantastic team.