Monday Night Football will feature the second game of the season between the Minnesota Vikings and Green Bay Packers. Since this game is happening in primetime on Monday Night Football, however, there will be a special patriotic opening to honor military veterans.

The Monday Night Football opener had long featured Hank Williams Jr. asking if everyone was ready for some football, maybe even a little Monday night party, but that all came to an abrupt halt earlier this season due to political controversy. In lieu of Williams doing the opener, this week's guest will be former Wisconsin football player Jake Wood.

Former Wisconsin football player Jake Wood will voice an open that is themed around Veteran's Week, teamwork and leadership. Visuals will include scenes from a Marine reserve group in Oshkosh, Wis.

Upper Midwesterners have probably heard of Wood, 27, an Iowa native who served in Iraq and Afghanistan during a decorated four-year stint in the U.S. Marine Corps. He has since turned his attention to Team Rubicon, which "unites the skills and experiences of military veterans with medical professionals to deploy vanguard teams that bridge the gap in disaster response," according to its website.

The Packers have also set up cards on each seat to honor the veterans. 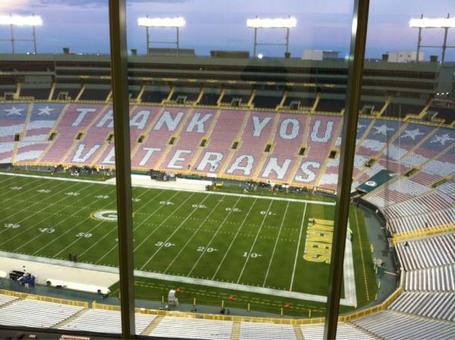 For more on the Vikings, be sure to tune in to Daily Norseman. Acme Packing Company is the place to go for anyone interested in the Packers.