A Guide To Lacrosse For The Uninitiated, Part 1: The Basics

For the best lacrosse coverage on the Internet, be sure to check out our good friends at SB Nation's home for lacrosse, In Lax We Trust.

Share All sharing options for: A Guide To Lacrosse For The Uninitiated, Part 1: The Basics

Now that we've expanded our coverage of Minnesota sports to include the Minnesota Swarm of the National Lacrosse League, I thought it would be prudent that we put a little something up here that sort of explains how lacrosse works. So, sit back, relax, and let us attempt to explain it. The game actually contains a lot of similarities to the game that Minnesota is most known for. . .ice hockey.

Indoor lacrosse, which is the form of lacrosse that's played in the NLL, is played on ice hockey rinks that have been covered with a green carpet, not entirely dissimilar to what the Metrodome had in it before they replaced it with the current field turf surface. The players have a ball that they pass around via their lacrosse sticks. The sticks, much like the one Ryan Benesch is carrying in the picture there, are anywhere from 40 to 46 inches in length, and its net portion can be no wider than 6.5 inches at its widest point. Along with the stick, or "crosse," a lacrosse player has to wear a significant amount of protective equipment, such as a helmet, gloves, shoulder pads, arm pads, and back/kidney pads. (Goaltender pads and such are larger, as you would probably expect.)

Much like hockey, it's a six-on-six game, with five "runners," which are either defensemen or forwards, and a goaltender. The field is set up like this: 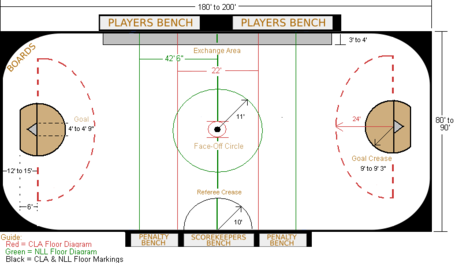 The green lines, in this case, are the ones you need to pay attention to, as those represent the NLL floor markings. As you can see, also similar to hockey, there is an offensive zone and a defensive zone, as well as a "crease" area around the goal that players are supposed to stay out of. In this case, the crease is a half-circle with a radius of nine feet around the goal. The goaltender is the only person that can stand inside this area with the ball.

There are typically three officials on the field at a time, which is another similarity to ice hockey. Each roster consists of 23 players, with 18 of them (16 runners, two goaltenders) dressing for each game. The NLL plays four 15-minute quarters, with a two-minute break between the first and second quarters, a 12-minute halftime, and a two-minute break between the third and fourth quarters. Each team also gets two timeouts per half.

There are no ties in lacrosse. If a game is tied after four quarters of play, the game goes to sudden death overtime.

Those are some of the basics of lacrosse. Later on this week, we'll come back with the second part of this article, dealing with some of the terminology involved with the game.