The 2011 NBA Draft Lottery is the next thing Minnesota Timberwolves fans should have on their radar since the Wolves clinched the best odds at drafting Duke's Kyrie Irving with last night's loss so those looking ahead may as well circle the date of May 17, 2011.

On that date, a representative from the 12 teams in this year's lottery (the Cleveland Cavaliers have both their own pick as well as the Los Angeles Clippers while the Utah Jazz own their own pick along with the New Jersey Nets' pick) will gather in Seacaucus, New Jersey, as a lottery machine decides their franchise's fate in the near future.

The NBA Lottery gives the best odds to the worst team (so in a way, the Wolves are winners!) to determine the first three picks of the Draft. The rest of the first-round goes in reverse order of the win-loss record for the remaining teams so, at worst, the Wolves could end up with the fourth pick in the NBA Draft.

If everything goes according to plan, and why wouldn't it, ESPN's Chad Ford sees the lottery playing it out like this: 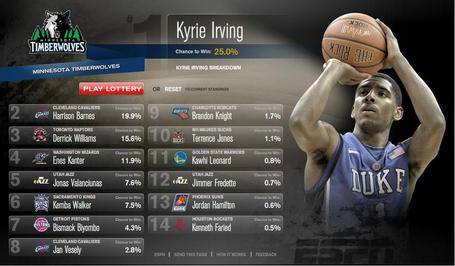 Let's hope it turns out that way next month. Rock, chalk, Timberwolves?