First of all, if you are not following the main SB Nation site, they are covering the Frozen Four from afar. Check them out, they’re doing a good job and are worth the read.

The Frozen Four is a breed of its own. Over the last decade, regardless of location, college hockey’s championship has sold out NHL-sized arenas (and half of Ford Field). Fans from colleges big and small make the trip each year, as the Frozen Four has become a gathering for college fans near and far. Unlike most sporting events, it’s about celebrating the game and the NCAA does a great a job of promoting this atmosphere with small touches like posting all 58 jerseys around the concourse and the FanFest.

While this year’s Frozen Four was lucky enough to have two teams within four hours of St. Paul, plenty of teams were represented in the stands. I was able to count twenty-six different college jerseys just walking around the arena and looking down from the press box.  There were plenty of North Dakota, Notre Dame, Minnesota-Duluth and Michigan jerseys but they were also jerseys from Minnesota, Niagara, Alaska, Bowling Green, RPI, Boston College, Ohio State and Yale. So although the crowd – especially in the second game – was full of green North Dakota jerseys, there were plenty of dedicated hockey fans regardless of affiliation. 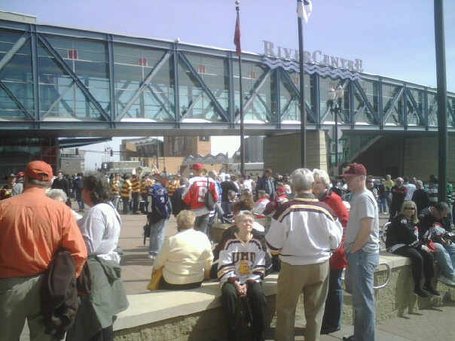 This picture was taken outside the Xcel Energy Center at 1:50 PM. Doors didn't open until 3 PM.


As mentioned in the game recap, special teams were the difference in the early game. Minnesota-Duluth went three for six on the power play but let Notre Dame back into the game when Calle Ridderwall scored a shorthanded goal 2:05 into the third period. Despite that blemish, watching the Bulldogs’ power play is a thing of beauty in lieu of the fact that their special teams was overlooked during the NCAA selection show. While many teams have a lot of speed, just watching them move their feet (which was the reason for so many penalties according to forward Jack Connolly) and move the puck from player to player. Even on the three powerplays Minnesota-Duluth did not score, they were still able to create multiple scoring chances.

While the goal scorers get a lot of glory, a lot of credit has to go to powerplay quarterback Justin Faulk. The freshman defenseman now leads the nation in scoring which keep teams honest with his slapshot and he has a vision of the ice that few at his age have.  Best of all, Faulk is playing for a national championship minutes away from his home in South St. Paul. Not too many players get to live that dream.

On the Notre Dame side, the Irish were unable to play a sixty-minute game. They scored a quick goal on a flustered Kenny Reiter along with T.J. Tynan using the lively boards to beat him to the puck but weren’t able to take advantage of it despite having a hot goalie in Mike Johnson. The game changed when Reiter settled and bailed Brady Lamb out of a horrible giveaway with forty-five seconds left in the first and unfortunately for Notre Dame they couldn’t stop taking penalties. Irish coach Jeff Jackson mentioned after the game that his team wasn’t used to the officiating crew and that the WCHA officials in the regionals were different, but at the same time it wasn’t an excuse and Notre Dame lost to the better team.

Strangely enough, the game that featured two hot goalies had seven goals and the game that featured an offense that scored twelve goals in two games was a physical defensive battle. Although Michigan goalie Shawn Hunwick deserves a lot of credit for stopping all forty shots, the Wolverines’ defensive play should come as no surprise.  In the last eight periods, the team has only allowed one goal and the defense has rallied around the absence of Brandon Burlon.

For North Dakota, there was a twenty-minute period between the final eight minutes of the second period and the final eight minutes of the third (when the Wolverines killed their fourth powerplay) where it looked like it was not a matter of if but when they would tie up the game. Starting with an amazing left-to-right save by Hunwick, the WCHA champs were in control and became the aggressors. Unlike the North Dakota banner at the Xcel (which was blowing back and forth), the team did not want to wave a white flag and until Scooter Vaughan scored an empty net goal the feeling was that this was still their tournament to win.

After the game, Coach Dave Hakstol was adamant that he did not see this ending, stating, "I mean, just going to bluntly honest. I don't think anybody in our locker room considered the option of losing down the stretch. Period." For senior Derrick LaPoint, the sting of the loss was so much that he couldn’t bear to take off the jersey he wore for four seasons twenty minutes after his collegiate career ended.  Despite winning two trophies earlier in the season, ending in the same position as fifty-seven other collegiate hockey teams meant the season was a disappointment.

-Thursday’s attendance was 19,139. It’s the third highest arena total with the other two also being at the Xcel Energy Center.
-Notre Dame forward Riley Sheahan had 14 penalty minutes this season. He had six in Thursday’s game.
-When asked about taking over the scoring lead for defensemen, Justin Faulk said, "It’s a pretty good feeling. I go out there and try to play pretty solid defensively against the other team’s top lines and when points come offensively, they come."
- Reiter on moving past allowing the first two Notre Dame goals: "You want to stop the bleeding. I’m playing my best when I’m on top of my crease being aggressive.
That’s what I try and focus on no matter what happens."
-North Dakota forward Corbin Knight: "It’s just one of those nights where the bounces weren’t going our way. It’s just unfortunate that tonight had to be one of those nights."
-Brock Nelson’s injury was the third time he had to be helped the ice this season. The first time happened at the World Juniors and the second was on the same ice at the WCHA Final Five.
-Michigan forward Ben Winnett was icing his wrist in the post-game conference; the product of the Wolverines blocking shots during North Dakota’s final flurry.
- Winnett on the team’s powerplay: "I always say your goaltender is going to be your best penalty killer, and he was that this evening. And as far as the rest of the guys, they just worked hard and I think we out worked their top players."