The Anthony Weiner Twitter Controversy Has Made Its Way To The St. Paul Saints

Share All sharing options for: The Anthony Weiner Twitter Controversy Has Made Its Way To The St. Paul Saints

Anthony Weiner has become a household name, mostly via Twitter, ever since the U.S. Representative for New York's 9th congressional district admitted to sending a lewd picture of himself to the public by way of the social networking service.

It looks bad for the government official, and may possibly even lead to his resignation, but the St. Paul Saints have been able to find a lighter side of the Weiner-gate story. In fact, the local minor league baseball team is celebrating Weiner on National Hot Dog Day.

The first 1,501 fans in attendance on Saturday, July 23, will receive a commemorative pair of "Tweeting Wiener Boxer Shorts." According to a press release on the team's website, the boxers will honor National Hot Dog Day with an image on the front of a blue bird taking a photo of a Wiener with his phone.

Minor league baseball promotions often illicit a mean SMH (shaking my head) from yours truly, but Weiner probably deserves at least a bit of this ridicule.

Oh, and since the readers of SB Nation Minnesota decided to read this far into the story, the image below is the one that will appear on the boxers. 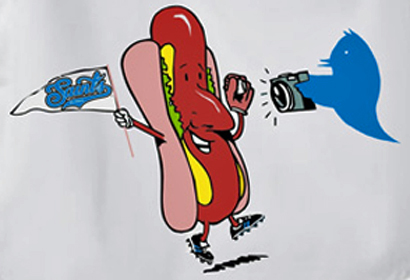