The 2012 Summit League basketball tournament begins on Saturday night. SB Nation Minnesota will be keeping track of two of our neighbors to the west as both the North Dakota State Bison and South Dakota State Jackrabbits will be competing for a shot at the NCAA Tournament.

The 2012 Summit League basketball tournament isn't the most high-profile conference tournament happening in March, but considering the tourney prominently features both the South Dakota State Jackrabbits and North Dakota State Bison, it probably makes sense to keep an eye on SB Nation Minnesota's neighbors to the west.

NDSU and SDSU are less than 30 miles -- combined -- from the Minnesota border and, as it stands right now, both teams have a better chance at advancing through their conference tournament than our own Minnesota Golden Gophers.

The Jackrabbits are the No. 2 seed in the conference tournament as they look to strengthen their resume with hopes of being the fist South Dakota team ever to make the NCAA Tournament. It won 't be easy, however, as the Jackrabbits will likely have to go through the bracket and win the Summit League championship to feel fully secure in booking their flights to March Madness.

South Dakota State isn't well known in basketball circles, but the school's been put on the map thanks to the incredible play of Nate Wolters this season. The 6-foot-4 guard from St. Cloud, Minn., averaged an incredible 21.2 points, 6.1 assists and 5.0 rebounds while leading the Jackrabbits to a 24-7 record including a notable win over the Washington Huskies in December.

The Bison might barely still be on the national radar thanks to the team that featured Ben Woodside, Mike Nelson, Michael Tveidt and Brett Winkelman making it to the big stage back in 2009 in a game against the Kansas Jayhawks. They aren't quite as potent now, however, entering the Summit League tournament as the No. 4 seed.

North Dakota State is led by sophomore guard Taylor Braun as he averages team-highs in both points (15.7) and rebounds (6.6) while Alrington, Minn., native Marshall Bjorklund also averages in double figures with 11.7 points to go with his six rebounds per game.

The full bracket is embedded below with the schedule slated to begin at 6:30 p.m. on Saturday night. 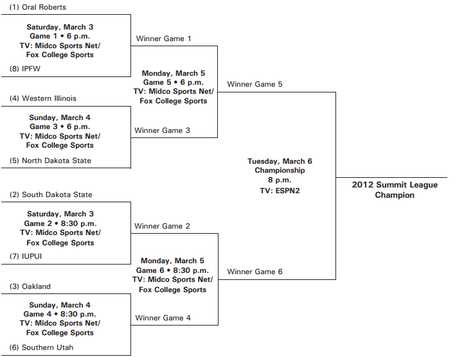 For more college basketball, be sure to visit SB Nation's NCAA basketball hub.