Justin Morneau has looked good at times this year, and at other times not as good. Let's find out why.

Justin Morneau is as healthy as he's been in nearly two years. In fact, 24 months ago he was just getting off to the best start of his career; a start that would carry forward through the summer until his concussion in early July. At that time he was having an MVP-caliber season, and was continuing to piece together what looked to be one of the best (if not simply the best) career for a first baseman in the history of the Minnesota organization.

What was so impressive about Justin was that he'd developed to the point where he didn't really have a gap in plate coverage. If you challenged him inside with a fastball, he was capable of yanking it over the right field wall. If you tossed a breaking ball down and away, he'd loop it into left field. He was seeing the ball better than ever, walking in 14.4% of his plate appearances while slugging .516 to the opposite field and 1.020 to his pull field. His OPS versus right-handed pitchers was 1.113 and .966 against southpaws.

You want to talk about beast mode in baseball? The man was whatever mythological beast exists in Candian lore, if Canadians have lore that doesn't involve hockey, Quebec, or maple syrup.

Unfortunately it has been almost 24 months since we've seen that version of Morneau. He's not quite himself. For example he currently struggles to catch up with a good fastball (.282 average versus right-handed fastballs, .242 versus lefties), and pitchers are starting to bust him inside more regularly.

If you visit Morneau's player page on ESPN you can see these graphics: 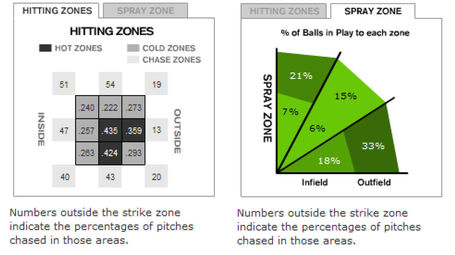 The hitting zones are backward for some reason, so you'll have to flip that in your mind. What we see is that Justin is trying to cheat on balls inside, and he's also quite vulnerable to pitches high and low. FanGraphs agrees: his chase percentage (38.1%) is the highest of his career. Indeed, FanGraphs makes note of a few interesting things regarding his plate discipline.

Essentially, swings and chases are up while contact is down. They're symptoms of Morneau's ongoing challenge of bringing himself up to speed.

He's doing much better on pitches outside. He's not chasing as often, and he's clearly having more success collecting hits on pitches that are down the middle and on the outer third of the plate. Justin is still patient on this side.

A part of this is because pitches in his "hot" locations are typically off-speed locations, which he's done very well with this season (particularly against right-handed pitchers). He's seeing these pitches better. It also means he's getting out in front of these off-speed offerings, because so far in 2012 he's collected exactly one hit to the opposite field.

There is going to be some luck involved for some of those balls in play to left field not falling for hits, but it's clear that Morneau is chasing fastballs and getting out in front of off-speed pitches.

For a guy who, at his best, could put the ball wherever he wanted it no matter where the pitcher threw it, the pattern we're starting to see proves that, yes, he's still adjusting. The skills still seem to be there, but because it's been nearly two years since he's really been healthy there's obviously some rust to be kicked off.

Right now if there is any conclusion to draw, it's that Justin is still working to get his pitch recognition back. It's likely that he recognizes this fact, which is why he cheats on fastballs (you can see him taking strong but sometimes wild cuts on them out of the zone) and is in front of off-speed pitches (great success, but everything pulled).

Yet when Morneau connects, he still connects with authority. As the season goes on and he gets his timing back, we just might get to see part of that Canadian beast mode.