Share All sharing options for: PHOTO: Adrian Peterson Returned To Practice Tuesday, Full Pads And All

Adrian Peterson suffered a gruesome injury toward the end of last season, leading many of the Minnesota Vikings faithful to fear the worst. Those fears were likely realized when we learned that the All-Pro running back tore both his ACL and MCL, but the man went through rehab like no mere mortal ever could.

In fact Peterson was back at practice on Tuesday, full pads and all -- a sight that would be hard to believe if it wasn't for the great Tom Pelissero snapping a picture of his ascent to the practice field. 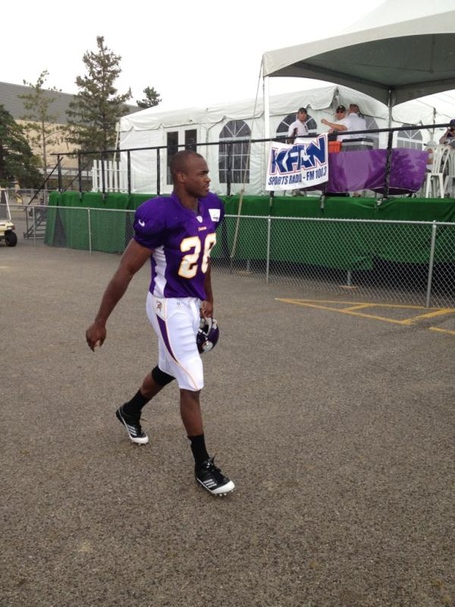 The next step -- now that Peterson is back on the practice field -- is seeing if Peterson's going to be able to return to form once the regular seasons begins ... but at least one expert (our own Christopher Gates) wouldn't bet against him:

Now, just shy of eight months after needing to have his knee almost completely reconstructed, Adrian Peterson is going to be back on the field doing what he does best: running the football and putting opposing defenders on their backsides. Whether he will be the same back he was before the injury remains to be seen because many running backs that suffer knee injuries of the magnitude that Peterson did come back as something less than what they had been prior to their injuries.

Then again, none of those people are Adrian Peterson. That's why it would be foolish to bet against him. I know I certainly won't be.

Only time will tell, of course, but what he's accomplished already is pretty impressive on its own.

For more Vikings news and analysis as well as the latest news on Adrian Peterson, be sure to visitDaily Norseman. Head over to SB Nation's Minnesota's Training Camp StoryStream for more training camp coverage. Also make sure to check out SB Nation's NFL hub for more football news.