PHOTO: Gophers Football Players Sitting In 'Horse-Trough Tubs' Because Why Not?

Share All sharing options for: PHOTO: Gophers Football Players Sitting In 'Horse-Trough Tubs' Because Why Not?

The Minnesota Golden Gophers football players have been going through two-a-days during training camp in preparation for their August 30 opener against UNLV Runnin' Rebels.

The two-a-days are probably pretty difficult, but it seems like the big fellas are getting a decent amount of downtime in between practices.During that downtime, they take apparently go behind some big building and jump into one-man bathtubs to relax -- a Minnesota Dude Day Spa, essentially.

The Star Tribune posted an excellent rundown of what an average day consists of, complete with the essential slideshow of photographs ... and we've taken the liberty of posting the best picture below.

They also fill ice baths in large horse-trough tubs, so players can cool down quickly after practice. "We go through 1,500 pounds of ice a week," Lochrie said, as well as 180 cases of Powerade and 100 cases of bottled water. "You can't eliminate injuries, but we put a lot of work into preventing as many as we can." 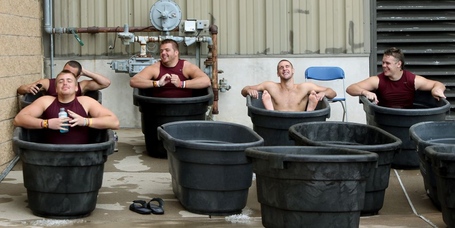 It doesn't sound all that comfortable, but man it just looks like that would just be the life, right?

For more on the Minnesota Golden Gophers, check out The Daily Gopher. You can learn more about college football around the country over at SB Nation's College Football hub.