Minnesota Vikings Change Their Name, Or At Least CBS Thought They Did

Share All sharing options for: Minnesota Vikings Change Their Name, Or At Least CBS Thought They Did 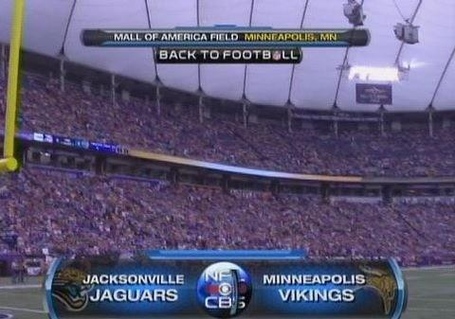 The graphic came while the Vikings were hosting the Jacksonville Jaguars on Sunday. CBS doesn't broadcast a lot of Viking games, as they hold the broadcast rights for the AFC, but that is still a pretty careless error. To make matters worse, no professional sports team in Minnesota goes by Minneapolis. The Twins, Timberwolves, Vikings and Wild all go by Minnesota.