Share All sharing options for: New Minnesota Basketball Jerseys To Be Unveiled Soon

The Minnesota Golden Gophers saw their football team debut new uniforms for the 2012 season, and it looks like the men's basketball team will sport some new threads come next season as well. Marcus Fuller of The Pioneer Press had a post talking about the new uniforms, though we weren't supposed to see them for awhile yet. But, as is often the case these days, a player happened to send out a tweet with an early picture.

This Tweet, from sophomore Joe Coleman, has been deleted (as is also often the case these days) since then, but like all things on the Internet, full deletion is never likely. Fuller posted the picture that was tweeted in his piece, and we have it embedded after the jump.

Coleman followed it up with a tweet that read "Dang guess I can't do that." The new jerseys from Nike are using a mesh design that the company refers to as their "Aerographics design," which allows an almost-subtle image on the jerseys. In this case, it's the likeness of Williams Arena, the "M" and the year the University was established, "1851." Make the jump for the picture. 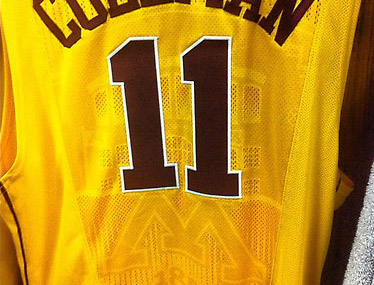