For more on the Golden Gophers, visit SB Nation's The Daily Gopher.

The Old Spice Classic in Orlando will be the focus of the week for the Minnesota Golden Gophers, but first they begin with a home game at The barn against Mount St. Mary's Monday night. The Gophers tip off Monday night at 7 p.m. and the game will be carried by Gophers Sports All-Access online.

The week then gets heavier on Thursday afternoon as the Gophers have a Thanksgiving Day matinee against the DePaul Blue Demons at 2:30 p.m. The game will be carried on ESPN 2: 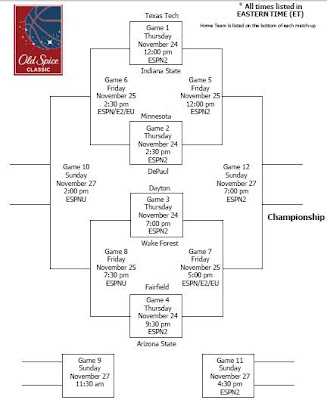 In the second round Minnesota will face either Texas Tech or Indiana State. The Sycamores were an NCAA tournament team a year ago out of the Missouri Valley Conference. In the final round Fairfield, Arizona State, Dayton, or Wake Forest awaits.

Minnesota is one of the probable favorites in this tournament, as Wake Forest and DePaul were near the bottom of their respective conferences last year, and Arizona State and Texas Tech were weaker teams in their conferences. Indiana State is the only team in the field that played in last year's NCAA Tournament, and they got there as the surprise conference tournament winner in the MVC.