This Week In Big Ten Football

Share All sharing options for: This Week In Big Ten Football

The first week of the 2011 college football season has come and gone, and the Big Ten Conference fared relatively well, posting an overall record of 10-2. The only two teams from the conference not to post victories were your Minnesota Golden Gophers, who took on an opponent ranked in the Top 25 in the USC Trojans, and Indiana, who lost to the football factory known as Ball State University. Here is a quick rundown of the scores from the first week of Big Ten action.

Leaders Division (have I mentioned that I still really, really hate these names)

As we take a look at the Big Ten schedule for the second week of play, the biggest match-up (at least in terms of team rankings) will take place in Happy Valley, where Nick Saban will lead the third-ranked Alabama Crimson Tide against JoePa and the 23rd-ranked Penn State Nittany Lions. The Crimson Tide are going through a bit of a transition at the quarterback position, and if the Nittany Lions want to have any chance at winning, they're going to have to take advantage of the inexperience of either A.J. McCarron or Phillip Sims and force some turnovers. (As of now, Saban has not declared a starter for this week's game.)

If Penn State can't force the issue and get their offense on short fields, it's going to be a long night for Matthew McGloin, Rob Bolden, and whoever else might end up playing quarterback for Penn State. Alabama's defense might be the most ridiculously talented unit in college football, and Penn State isn't going to score a whole lot of points regardless of their field position. Anything can happen in college football, but I have a hard time envisioning a scenario where Alabama leaves with anything but a decisive victory over the Nittany Lions.

In terms of hype, the biggest game of the weekend will take place at the Big House in Ann Arbor on Saturday night, as the Michigan Wolverines are hosting the Notre Dame Fighting Irish, who we're apparently still pretending are a big-time college football program even though that hasn't been the case since Lou Holtz left town. This will be the first night game in the history of the Big House, and you can bet the Wolverines will be fired up. The Fighting Irish lost a crazy, delay-marred game in their opener against the University of South Florida, largely due to the fact that they turned the ball over three times inside the South Florida 10-yard line. If the Fighting Irish can stop shooting themselves in the foot long enough to actually put the ball into the end zone, the Wolverines could be in for a rough one, as Notre Dame did move the ball up and down the field pretty well in their opener, and the Michigan defense still doesn't appear to be all that good.

The quarterbacks will be a focus of this one, too. The Wolverines come into this one with the extremely talented (and extremely injury-prone) Denard Robinson behind center, who is capable of finding the end zone at any time from anywhere on the field. Notre Dame, on the other hand, isn't sure whether they'll be turning to Dayne Crist or Tommy Rees. I'd go with Rees, myself, just based on last week's performances, but I'm not Brian Kelly, either. This should actually be a pretty good football game, all things considered, but I would expect the home crowd to be the advantage as the Wolverines squeak out a close one.

In rivalry games, the Iowa Hawkeyes travel to Ames to take on the Iowa State Cyclones in the battle for the Cy-Hawk Trophy, which is. . .well, dear God, just look at it. 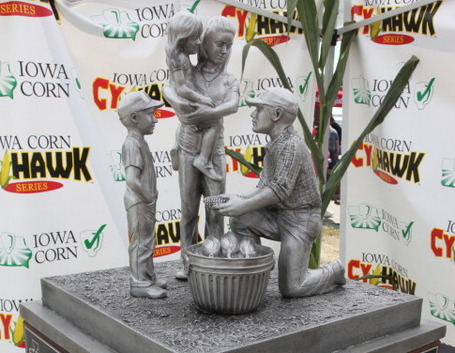 Seriously, it's like the Children of the Corn decided to play football or something. Who gave the green light to this thing? Apparently there's a redesign coming, and it won't be revealed until Saturday. . .this is probably for the best.

Whatever trophy they're playing for, I don't see the Hawkeyes have a whole lot of trouble with the Cyclones.

The rest of the games are your standard, early season cupcake fare. Outside of the aforementioned Alabama/Penn State match-up, it should be a fairly successful weekend for the Big Ten. Only two of the Big Ten's 12 teams, Iowa and Purdue, are playing on the road this week. Here is the rest of your conference schedule for this week.