The 2012 Big Ten Tournament bracket no longer includes the Minnesota Golden Gophers following Friday evening's loss to the Michigan Wolverines. The show must go on however, as they say, so we've decided to continue to provide coverage starting with coverage of Saturday's schedule.

Since the No. 10 seed Golden Gophers were outted in overtime, there are no longer any underdogs included in the field. Instead the top-seed Michigan State Spartans will take on the Wisconsin Badgers on one side of the bracket while Michigan plays the Ohio State Buckeyes on the other side with the winners advancing to Sunday's Big Ten championship game.

As far as times and television channels are concerned, well, that's included below along with an updated Big Ten Tournament bracket.

All times are Eastern but, for the visual learners, there's this: 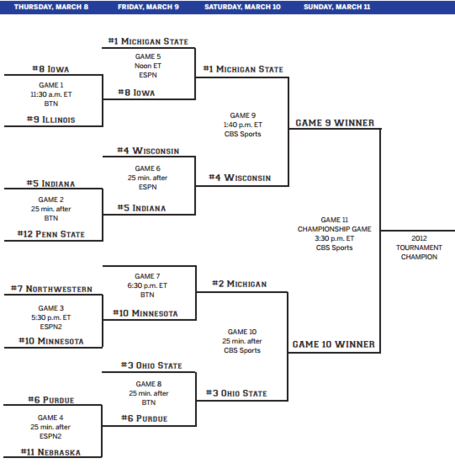