Share All sharing options for: NIT Bracket 2012: Washington And Seton Hall, Not Illinois, Highlight Field Of 32

The Minnesota Golden Gophers were selected as No. 6 seed in the 2012 National Invitational Tournament bracket and will play La Salle on Wednesday night. The full bracket was released later on Sunday night, as part of Selection Sunday, and features quite a few good teams.

The Big Ten is represented pretty well in the 2012 NCAA Tournament as well as the NIT Tournament as the Gophers join the Iowa Hawkeyes and Northwestern Wildcats in the bracket. One team that isn't in, however, is the Illinois Fighting Illini despite matching the Gophers' 6-12 record during conference play.

The No. 1 seeds in the NIT Tournament include the Washington Huskies, Arizona Wildcats, Tennessee Volunteers and Seton Hall Pirates. SB Nation's Mike Rosenthal listed the Pirates as the biggest snub in the NCAA Tourney.

It was a disappointing Sunday for a number of teams hoping to hear their name called during the selection special, but it was especially brutal for a Seton Hall team that most "Bracketologists" had penciled into the field of 68.

The Pirates' lone non-conference loss was to Northwestern, and their computer numbers appear to be at-large worthy enough. They had a chance to help themselves by earning a couple of quality wins in the Big East Tournament, but they fell to eventual champion Louisville in the second round.

The full bracket is included below. 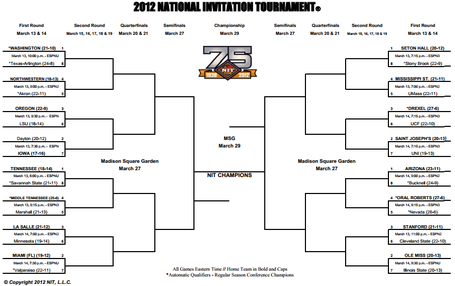