Share All sharing options for: NIT Bracket 2012: Minnesota Faces Miami With Chance To Advance To Quarterfinals

The 2012 National Invitational Tournament bracket has undergone quite a bit of change since the Minnesota Golden Gophers picked up an opening round victory over the La Salle Explorers. Following the weekend's results, The NIT Tournament has just three spots left in the semifinals.

One of those semifinal spots will be decided when the Gophers meet the Miami Hurricanes on Monday night. The Hurricanes entered the tournament as the No. 2 seed and picked up a convincing victory over Valaparaiso in the first round, but Tubby Smith's Gophers looked better than a No. 6 seed with their victory last week as well.

The remaining games on Monday night will feature the Tennessee Volunteers taking on Middle Tennessee -- with the winning team advancing to face the winner of Minnesota vs. Miami -- while the Stanford Cardinal take on the Illinois State Redbirds on the other end of the bracket. 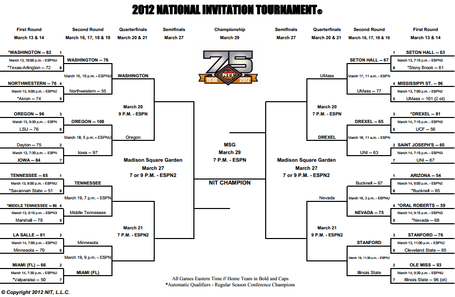