The Minnesota Golden Gophers were able to pick up a season-ending victory over the Nebraska Cornhuskers on Saturday afternoon. The game didn't exactly matter as Tubby Smith's team will still need to put on an impressive performance in the 2012 Big Ten Tournament, but Rodney Williams was the top play on SportsCenter as he showcased his dunking abilities.

Williams had a solid all-around game as the junior scored 16 points to go with eight rebounds, three blocks and a steal, but the only reason anyone will remember the game is going to be the Minneapolis native's dunk over Cornhuskers forward Brandon Ubel.

Williams is known as a dunker, but that show of athleticism is impressive even for him. Former Gophers player Dusty Rychart posted the following picture on Twitter, too, in case anyone is interested in making it a poster. 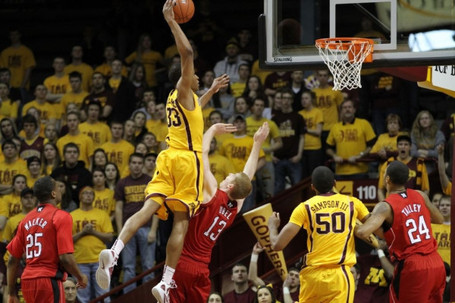