The 2012 Big Ten Tournament got off to a rousing start as some brackets were likely busted when the Minnesota Golden Gophers upset the Northwestern Wildcats in overtime on Thursday afternoon. Friday's schedule doesn't leave any easy upsets to predict, but there is a reason it's called March Madness.

Before getting to a full bracket and schedule, it seems to make sense to hit on the Minnesota game first considering this is SB Nation Minnesota. Tubby Smith's team won't have an easy go on Friday as the No. 10 seeded Golden Gophers will take on the No. 2 seed Michigan Wolverines at 5:30 p.m. on the Big Ten Network.

Starting the day off on Friday will top-seeded Michigan State Spartans taking on the Iowa Hawkeyes in a game schedule 11 a.m. Central Time on ESPN. Following the conclusion of that game, the Wisconsin Badgers will face the Indiana Hoosiers. The night cap, scheduled for 25 minutes after the Gophers game, will feature the Ohio State Buckeyes playing the Purdue Boilermakers.

A full schedule of the day's events is listed below (all times Eastern), along with the actual bracket embedded for the visual learners in attendance. 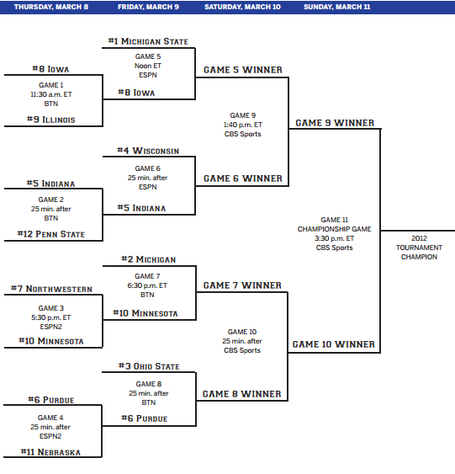