The 2012 Big Ten Tournament bracket has still only had one upset after Friday's opening game. The Michigan St. Spartans did what they were expected to do as the top seed in the tournament, dispatching the Iowa Hawkeyes in the first of four quarterfinal games.

The Spartans are missing standout freshman Branden Dawson, but they were still able to handily pick up a 92-75 victory while advancing to the semifinals of the conference tournament. ESPN's Myron Medcalf, a Big Ten basketball aficionado, posted the fun stuff following the game:

In the first half, Derrick Nix punched a hole into the Big Ten logo on the padding around one of the baskets after a tough bucket. ... Michigan State scored 55 points in the first half. The Spartans scored a total of 55 points in their Feb. 28 loss at Indiana. ... The Spartans played their first game without Branden Dawson, who tore his ACL in the final game of the regular season.

The bracket, as it stands currently, is included below. 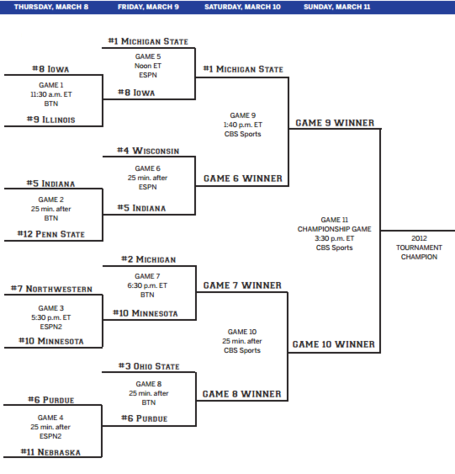