The 2012 Big Ten Tournament is done for the Minnesota Golden Gophers after they were unable to advance through to bracket by winning their second overtime game in as many nights, but the show will go on at Bankers Life Fieldhouse.

The Michigan St. Wolverines, Wisconsin Badgers and Michigan Wolverines have all advanced through to the semifinals while the game between the Purdue Boilermakers and Ohio State Buckeyes still remains. Need a quick preview for that game? Our friends at Along The Olentangy have you covered:

If Purdue pulls off the upset, or even remains competitive throughout, it may be due to an obscure force. On February 7th, during the first game against Purdue, guard D.J. Byrd scored 24 points off the bench and kept the Boilermakers close. Ohio State should be aware of Byrd now, which would make a repeat performance from the role player a bit more shocking. William Buford exceeded Byrd's performance, scoring 29 points and hitting three 3-pointers, a performance that he, on the other hand, would be welcome to repeat.

The complete bracket is included below. 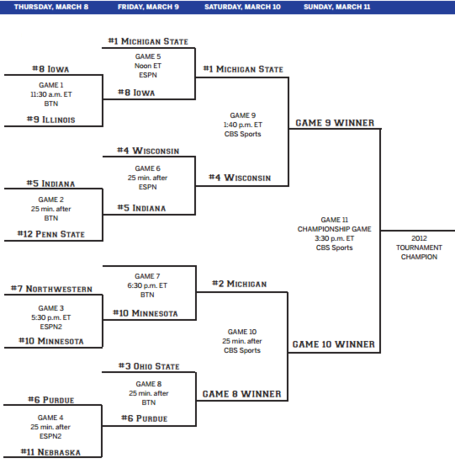