By all accounts, it was an ugly display on Saturday in the Minnesota Golden Gophers' annual Maroon-Gold Spring Game. That was to be expected, but I think the 3,000-plus fans that showed up probably left a little disappointed.

According to Fox Sports North's Tyler Mason, this just about sums up the game, although it doesn't include the one made field goal: 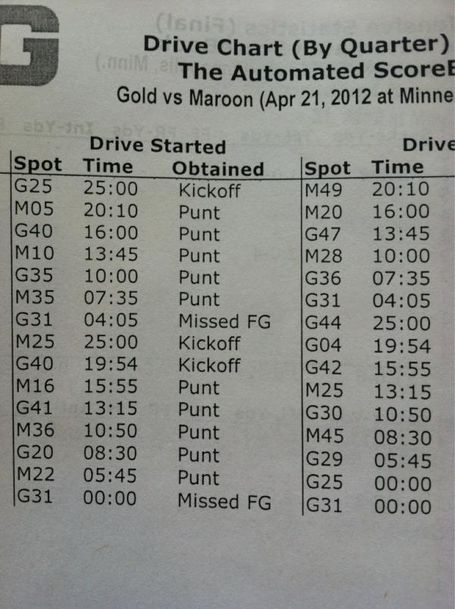 Rising redshirt sophomore Donnell Kirkwood carried the ball five times for 25 yards. Rising senior quarterback MarQueis Gray was 4-for-8 passing for 62 yards. He was the only quarterback to complete a pass in the first half. Redshirt senior Brandon Green had two receptions for 50 yards. (Stats via Golden Gophers' Twitter.)

Here are video highlights of the Spring Game from the Golden Gophers: