Nine games into the season and I think it's safe to say the Minnesota Golden Gophers are a good hockey team. Or at least they're making me smile.

After three consecutive seasons of missing the postseason, the Gophers are 8-1 (5-0-0 WCHA) with their latest victory, a 2-0 shutout over hated rival North Dakota (3-5-1, 1-4-0 WCHA). For a team which came into the game leading the nation in offense with 5.38 goals per game, it was the defense which shined Friday night. Nick Bjugstad and Tom Serratore scored for Minnesota as Kent Patterson made 24 saves and  tied Rob Stauber's single season record with his fifth shutout this year. He's done that in a month and now has a .945 save percentage while playing every minute this season.

The game took a while to start. For the second time all season, the dominant Gophers offense was shut out. Both teams took a while to warm up as nervous energy led to sloppy play and missed passes. However, Minnesota seemed to settle down after Erik Haula almost scored on a North Dakota giveaway and Andrew MacWilliams went off for slashing midway through the period. The Maroon and Gold were able to out-shoot UND 10-6 in the opneing twenty minutes but goaltender Aaron Dell stood tall between the pipes and did not allow Minnesota any rebounds despite six shots below the faceoff circle.

Bjugstad's power play goal made it 1-0 Gophers with 7:16 left in the second  period after he took advantage of a 3x0 caused by defenseman Nate Schmidt hitting Sioux captain Mario Lamoureux twice with slap shots and shot it over Dell.

"I'm not sure what happened," the sophomore said, "but if I didn't score I'd catch heat from the guys."

"The guys" would have a good reason to give Bjugstad grief as Minnesota spent most of the second period catching up. Seth Ambroz put himself and the team in a bad position 30 seconds into the second period by receiving a well-deserved checking from behind penalty and game misconduct.
The Gophers penalty kill, which came into the game killing 35 of 40 penalties, once again worked their magic. North Dakota was unable to get anything going in the five minute major and senior Taylor Matson had the two best opportunities for Minnesota. Freshman Kyle Rau also stepped up as a loud Mariucci crowd (the noisiest I can remember in a few years) went nuts after all five minutes were up.
"[Killing the 5 min major] was a huge momentum boost," said Kent Patterson after the game.

Gophers-Sioux series are known for their physical play and tonight's game did not disappoint. (List of players) were involved in three separate fights Patterson was ran over diving for a puck. By the end of the full metal mayhem, 5 North Dakota players and 4 Minnesota players were in the penalty box; causing for a humorous exchange when all left. 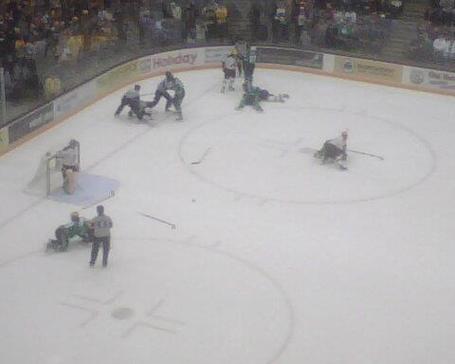 Despite Bjugstad's goal, Minnesota struggled at times on the power play. Much of the third period was spent trading off penalties and the two teams combined Friday night to go 1-14 with the man advantage. Just when it seemed like Aaron Dell and Kent Patterson would stop everything in sight, Nick Larson fed fourth-line forward Tom Serratore on a breakaway and the sophomore was able to get the puck past Dell for his first goal this season.

"It's nice to see a guy like Tom Serratore get rewarded," said Gophers head coach Don Lucia. "We played well and [for tomorrow] we need to continue to give ourselves a chance to win."

North Dakota had a couple late chances to ruin Patterson's fifth shutout - most notably junior Danny Kristo had a golden opportunity in front of the crease - but the Gophers were able to hold out and get the win. The Maroon and Gold may not have shown the offense which has won them games this season, but killing a five minute penalty, some great defense are traits which good hockey teams have. It's not easy to beat North Dakota, but Minnesota did.

And that brings a smile to my face.

The Minnesota Golden Gophers go for the sweep tomorrow night against the North Dakota Fighting Sioux. Game time is at 7:30 PM Central and it will be broadcast on the Big Ten Network. For more Gophers coverage, be sure to check out The Daily Gopher and for more college hockey coverage, check out Western College Hockey Blog.