Who doesn't love the Battle Hymn of the Republic?

The song, which is played by the Gophers band after any home sweep, came out Saturday night as the University of Minnesota hockey team beat the University of North Dakota 3-2 on a late Kyle Rau goal. The freshman scored with 46 seconds left as fifth-ranked Minnesota (8-1-0, 6-0-0 WCHA) rallied from a 2-1 third-period deficit and swept the Fighting Sioux (3-6-1, 1-5-0 WCHA) at home in the regular season for the first time since 1996.

Like Friday's game, Nick Bjugstad got Minnesota on the board first. The sophomore scored his eighth goal of the season as he took advantage of one of the bad Dell rebounds and pounded one home on the doorstep at 7:09.

However North Dakota was able to hang in early. Minnesota dominated outside of two penalties and Aaron Dell gave up multiple rebounds, but the Gophers and Sioux ended the first period tied at 1.

Several other Gophers, including Erik Haula, Seth Ambroz and Kyle Rau, had opportunities in front of Dell but were unable to get a clean shot past the North Dakota goaltender.  Despite the 19-5 shot advantage, the Fighting Sioux tied the game at 1 when Brock Nelson knocked the water bottle off (insert seconds) after an Ambroz penalty. The goal snapped Patterson's 99:26 shutout streak dating back to the second period of Saturday's Alaska-Anchorage game.

Minnesota came out flat in the second period as the North Dakota penalty kill, which had stopped the potent Maroon and Gold power play all series (going 14-15 on the top-ranked PP), stood tall as Minnesota could not take advantage. Despite the Gophers having most of the opportunities, Rocco Grimaldi was able to shine in his fourth college game and the freshman scored his first collegiate goal 8:39 into the second period. The religious Grimaldi celebrated his snipe by "Tebowing" and North Dakota responded by controlling play.

One thing which was stressed by Minnesota Coach Don Lucia after the game was the number of "dirty" goals by the Gophers. Normally Minnesota is a team which tries to score the fancy or pretty goal and North Dakota works for the rebound in front of the net; this weekend the roles were reversed.

That was no better shown than in the two Gophers third period goals. Nick Larson started the Minnesota comeback 13:56 into the third period after the senior was in front of the net for a Travis Boyd pass. Larson's first goal of the season brought the Mariucci faithful (or the 75% who were wearing Maroon and Gold) back to life.

The Sioux, who spent most of the third period playing defensive hockey, were able to rev it up into fifth gear but Minnesota goalie Kent Patterson, as he has been all season, was phenomenal. Brock Nelson came inches away from scoring his second goal of the night on an odd-man rush only for Patterson to make a remarkable save; it was surprising enough that the North Dakota fans believed he had scored. That was preceded by the junior goaltender shutting down Mark MacMillan and Corban Knight on open looks.

"[Patterson's] on like that all year," said forward Nick Larson. "He's been given an opportunity and made the most out of it."

With Dell making saves of his own, Saturday's game looked to be heading to overtime. However, an unhinged Sioux net proved to make the game's biggest difference because a tired North Dakota team was unable to change their lines while the Gophers could.

That meant Minnesota brought on their top guns: the Rau-Nick Bjugstad- Zach Budish line. With 46 seconds left, Budish was able to get the puck down low to Rau and he did what he's done all season: score within ten feet.

"[Rau] scored a lot of goals from that spot," said Lucia.

North Dakota deserves a lot of credit this weekend and were classy in defeat. While the series got chippy at times, as every Minnesota-UND series does, the Fighting Sioux were able to shut down the nation's best power play and they saw the emergence of Grimaldi and Brock Nelson to create a second scoring line. However, as the final seconds ticked away and it became clear to the 10,234 in Mariucci Arena that the Battle Hymn of the Republic would play once again. 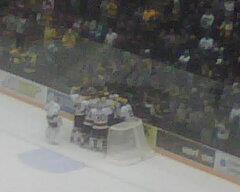 Next weekend Minnesota heads across the St. Croix to face their other major rival, the Wisconsin Badgers. Both games start at 7 PM with Friday's game being broadcast on Fox Sports North and Saturday's game broadcast on the Big Ten Network.