With the Gophers hockey team now number one in the country after sweeping North Dakota, Nathan Wells takes a look back on this past weekend's series and some of the highs and lows. For more Gopher coverage, be sure to check out The Daily Gopher.

With how Friday and Saturday went, I would like to meet the Gopher hockey fan who is not happy with this weekend's series. Besides obviously sweeping hated rival North Dakota, the two games had a bit of everything. There were beautiful goals and goal celebrations. There was great defense and penalty kills which were a combined 24 for 26. Kent Patterson stood on his head at times and has a shutout every other game while Sioux goalie Aaron Dell showed at times why he was named the WCHA Preseason Goalie of the Year.

Like hockey fights and physical play?  Then look at Friday's game where the Gophers and Sioux had 29 penalties for 69 minutes and four fights going on at the same time. Not a fight fan? Then how about Saturday night where the two teams were civil and settled their differences on the ice.

And then there's Saturday's comeback victory, which  was done in the most heartbreaking way possible. It was so good Machiavelli would be proud of Kyle Rau and Minnesota. Little Sioux fans cried. Minnesota proved their legitimacy by becoming the number one team in college hockey and showed the road sweeps of Minnesota-Duluth and Alaska-Anchorage were not flukes.

If anything, this year's team looks better than any recent Gophers squad. Although other recent teams have gotten off to great starts, including the 2008-2009 team which was #1 in November before missing the NCAA tournament, they have not had the same success. The 2011-2012 Minnesota hockey team is 9-1 while the 2008-2009 club was 7-1-4; they only had one sweep at the time compared to this year's four sweeps. While there will be bumps in the roads this season which will tell how far Minnesota goes, the Gophers through ten games have proven themselves to be the best team in the country.

So with as good as everything was with this weekend's Minnesota-North Dakota series, there is one sad thing to take away from it. Another Gophers-Sioux weekend means that fans of the best rivalry in college hockey are two games closer to these two teams being in separate conferences. Although Minnesota will be playing Big Ten rivals once the BTHC begins in 2013-2014, losing the North Dakota rivalry will be tough. For those who were at Mariucci this weekend or watched on television, you could see and hear the passion from the fans and players.

To put it bluntly, I'll miss the rivalry more than North Dakota fans will miss the Sioux nickname. While Don Lucia said on Judd Zulgad's show that they will try to keep it going (albeit not on an every year basis), the realignment in college hockey costs Minnesota one of the best weekends of the year.

The Gophers unveiled a new third jersey on Saturday and boy is it a beauty. From the Gophers' Facebook page: 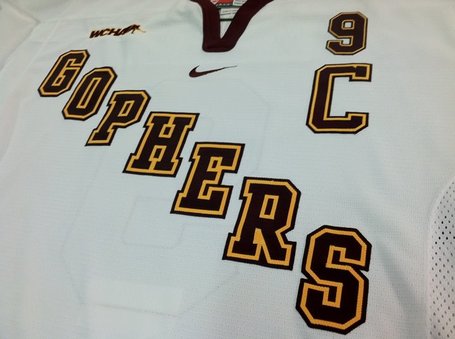 I've always been a fan of the throwback sweaters. Minnesota has a lot of history to go back on and these feel like a modern version of the jerseys worn in the 1960s. The shoulder patch, which is an old-school skating Goldy, feels at home and recall the past. Players wearing Maroon and Gold should be proud to have the "M" for Minnesota on the front of their jersey but they are also Gophers. With these new third jerseys and the diagonal "G-O-P-H-E-R-S", I think fans and players alike get to show off both.

I mentioned this in my Saturday game recap but Greg Wyshynski (aka Puck Daddy) of Yahoo! Sports had an article on Rocco Grimaldi celebrating his first collegiate goal by "Tebowing." At the time, the celebration upset me. Despite Grimaldi being religious and having Tim Tebow as an idol, there's something about being flashy after scoring your first goal which seems to be the opposite of why one would someone would pray.

Then again, in a sport which shuns any form of celebration (with all apologies to Phil Kessel), it's nice to see some real emotion. These players rarely show it and it's hard to fault Grimaldi for wanting to give thanks to God; players it all the time in postgame interviews. Would I have done the same thing? No. It would have been better to have Grimaldi celebrate his first goal with his teammates but I've mellowed my stance on his celebration.

Finally, a lot of people were complaining to me on Twitter (yes this is a shameless plug - follow me @gopherstate) about the Big Ten Network's production of Saturday's game. I was at Mariucci Arena so I only had a chance to skim through the game later but it left a lot to be desired. The Gophers are the only college hockey team who have almost every game broadcast on television (with the vast majority being on Fox Sports North) and it makes sense for fans to have high standards; however anyone who wanted to watch a game or be introduced to college hockey had to be disappointed.

Compared to FSN, BTN had poorer camera angles (it was a tighter shot but when someone scored people stood up in the shot) and bad direction cutting into and out of different camera angles. The announcers themselves were uniformed and took away from the game. Of course it didn't help that two of the announcers, Rob Andringa and Mark Strobel, were Wisconsin Badgers commenting on two teams they hate but that doesn't stop others from doing their job.

At least Andringa and Strobel will be at home for Saturday's BTN game between Wisconsin and Minnesota. Fun!

Homerism aside, this past weekend has shown that BTN has much to be desired in their hockey broadcasts. Hockey's a huge niche and for a network which will be broadcasting the sport much more frequently when the Big Ten Hockey Conference starts, they need to take these games seriously and improve their presentation.

Whether that means hiring better production and on-air talent or taking cues from the teams who have games broadcast on local RSNs, BTN will be the national face of college hockey (along with Versus/NBC Sports Net, who announced this week that they will be broadcasting college hockey games) and should present themselves like they are. Minnesota fans should not expect slanted coverage on BTN towards the Gophers like Fox Sports North would have, but I want to have the televised Big Ten games feel more special than they are. Right now they don't.