Some miscellaneous Gopher hockey news and notes that aren't big enough for their own post:

-Pairwise Update: Despite being off last week, Minnesota actually moved up in the all important Pairwise rankings (which decide the seeds and at-large bids for the NCAA hockey tournament). The Gophers went from 9th to 7th, tied with Merrimack, and would be a second seed in the West Regional if the season ended today.

Minnesota is one of many WCHA teams who see their stock lowered in the Pairwise. Right now only the Gophers and Minnesota Duluth would be guaranteed in the tournament if the season ended today. North Dakota likely would be in as the last at-large bid but only if there are no upsets in the conference tournaments. Colorado College and Denver are also within striking distance as the season winds down.

-Super Coach: It wasn't all business during the bye week for Gopher head coach Don Lucia. Lucia took his son Mario, who presently plays for the Penticton Vees in British Columbia, on his official recruiting visit to Notre Dame and then to Indianapolis for the Super Bowl. The younger Lucia, drafted by the Minnesota Wild this past summer, will be playing for the Irish next fall, following in the footsteps of Don. 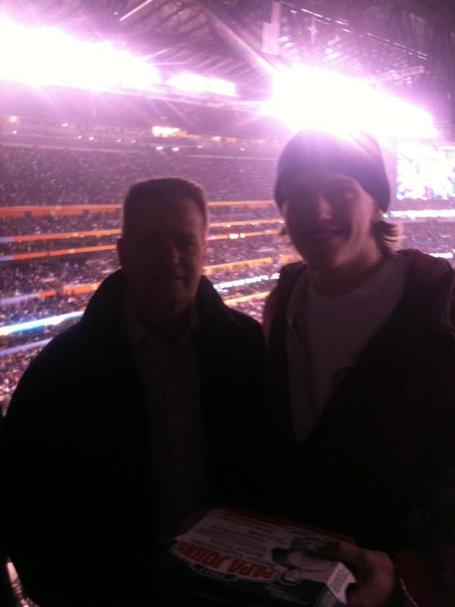 -Ness Makes NHL Debut: Former Gopher Aaron Ness made his NHL Debut with the New York Islanders Tuesday. The Roseau native left Minnesota a year early this past April to turn pro and already has been called up by GM Garth Snow (aka the guy who was not happy with Kyle Okposo's development with Minnesota then turned around and drafted Ness and let him develop for 3 years at the same Minnesota). Ness played 14:25 and was plugged in while two Islanders defensemen battled injuries.

-St. Paul in running to host Big Ten Hockey Tournament: News came out this week that the Big Ten (which the Gophers will join in 2013 alongside Wisconsin, Michigan, Michigan State, Ohio State and Penn State) will forgo their original plan of an on-campus tournament and look for a neutral site to host. According to Andy Baggot of the Wisconsin State Journal, the two front-runners are two buildings which have hosted conference tournaments before - Joe Louis Arena in Detroit (with the CCHA Tournament) and Xcel Energy Center in St. Paul (home of the WCHA Final Five).

I think this is the best option for the Big Ten. 4 of the 6 teams are closer to Detroit but Minnesota and Wisconsin have two of the largest fanbases in college hockey. Having the tournament in St. Paul also makes sure that the NCHC (which will be formed at the same time with North Dakota, Minnesota Duluth, St. Cloud State and other teams) cannot use the X for their own conference tournament and puts "the National" at a disadvantage at least every other year. Whether the casual fans and large Gopher fanbase can fill the X on a yearly basis like the WCHA teams do at the Final Five is unknown and until a pattern emerges that either St. Paul or Detroit is the better option at filling the building, the Big Ten would be best off switching between the two sites.