The WCHA Final Five bracket is final with the Minnesota Golden Gophers scheduled to play the winner of Thursday night's game between North Dakota and St. Cloud State in Friday's semifinal round.

The Minnesota Golden Gophers hockey program is back in the WCHA Final Five Tournament for the first time in three years after sweeping Alaska Anchorage over the weekend. Thanks to the Gophers earning the top seed in the bracket, they'll have an extra day to prepare for their opponents in the semifinals.

The Gophers used a pair of goals from Erik Haula, coming in just 18 seconds apart, to close out a sweep of the Seawolves with a 7-3 victory on Saturday night. They'll need more of that magic this weekend, however, if they want to play through the duration of a tough bracket at the Xcel Energy Center.

The Gophers will be watching Thursday's game between North Dakota and St. Cloud pretty closely, one might imagine, considering the winner of that game will play Minnesota in the semifinals on Friday night. The full bracket is included below (via College Hockey News). 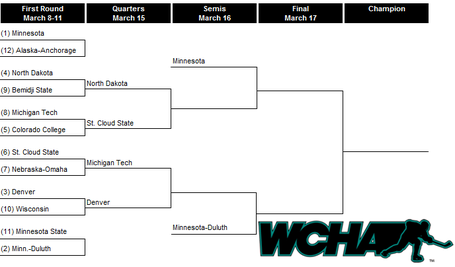 For more Minnesota Golden Gophers coverage, be sure to check out The Daily Gopher. You can also read up on the WCHA at the Western College Hockey blog.