The road to Tampa for the 2012 Frozen Four has been unveiled and for the Minnesota Golden Gophers, they must go through the Boston University Terriers.

For the first time since 2008, Minnesota is in the NCAA Hockey Tournament. As the West Regional hosts, the #2 seed Gophers will play close to home at the Xcel Energy Center in St. Paul against #3 seed Boston University Saturday March 24th at 4 p.m. Central. The winner of that game faces the winner of #1 North Dakota and #4 Western Michigan Sunday March 25th at 4:30 p.m. Central for a Frozen Four berth.

Defending national champion Minnesota-Duluth also made the tournament and will play against Maine Saturday March 24th at 6:30 p.m. Central.

Despite the Gophers having home-ice advantage, the West regional is the toughest of the four regions. It features the CCHA tournament winner (Western Michigan), WCHA regular season (Minnesota) and tournament champions (North Dakota) and a Boston University team which spent much of the season in the top-five. Even if they beat the Terriers in the first round, there's a good chance Minnesota will play the last team that beat them, North Dakota.

The other three regionals are in Worcester, Massachusetts (Northeast), Green Bay, Wisconsin (Midwest) and Bridgeport, Connecticut (East). As of right now the West Regional games are aired on tape-delay or online at ESPN3 but there's a chance Fox Sports North picks up the syndication rights.

The full bracket is included below (via College Hockey News). 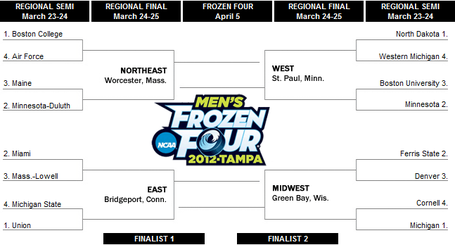 For more on the Minnesota Golden Gophers, check out The Daily Gopher. You can also follow Western College Hockey and SB Nation's NHL hub for more on the NCAA hockey tournament.