If a team has a nickname and is not allowed to use, does it still exist?

That's the position the University of North Dakota finds themselves this year for the NCAA Hockey Tournament. After a year which has seen the school agree to retire its "Fighting Sioux" nickname only for the state of North Dakota to require the team to use it, UND enters the 2012 tournament barred from using it by the NCAA. This means the Fighting Sioux can't use the name or logo on anything and that includes their iconic jerseys.

In their place, North Dakota have new jerseys, a photo of which taken by Bruce Brothers of the Pioneer Press is after the jump. 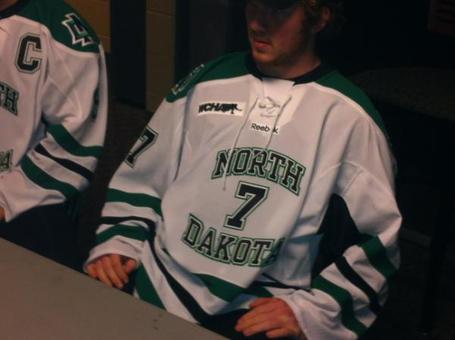 The "not allowed to be called the Fighting Sioux" will unveil these tomorrow when they play Western Michigan in the first round at 12:30 p.m.

For more on the road to the Frozen Four in Tampa, stick with our 2012 NCAA Hockey Tournament storystream. You can also follow Western College Hockey and SB Nation's NHL hub for more NCAA Hockey news.