The 2012 WCHA Tournament bracket was set over the weekend. The Minnesota Golden Gophers will play Alaska-Anchorage in the first round.

The 2012 WCHA tournament bracket was finalized over the weekend and, as expected, the Minnesota Golden Gophers picked up the top seed and will face Alaska-Anchorage in the first round. A matchup pitting the top and bottom seeds sounds like a gimme, but the Gophers hockey team learned last season that they can't take Alaska-Anchorage lightly.

The Gophers were knocked out of the postseason by Alaska-Anchorage last year in the first round, but after winning the McNaughton Cup on Saturday, Minnesota should carry a bit of momentum into this wekeend's series.

Other Minnesota schools in the tournament, in order of their seed, are No. 2 Minnesota-Duluth, No. 6 St. Cloud State, No. 9 Bemidji State and No. 11 Minnesota State-Mankato.

Following this weekend's first round, the winning teams will earn berths in the 2012 WCHA Final Five, set for March 15-17 at Xcel Energy Center in Saint Paul, Minn. The winner of the WCHA Final Five receives the WCHA's automatic bid to the NCAA tournament.

A bracket of the first round is included below. 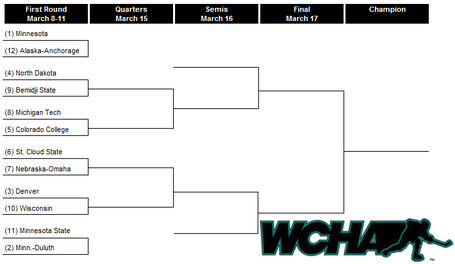 For more on the Minnesota Golden Gophers, check out The Daily Gopher. You can also catch up on the WCHA and college hockey over at Western College Hockey.