It isn't on the level of having ice cream with the attractive Iceland trainer but Ducks taking pictures with Cake Eaters doesn't add up.

University of Minnesota redshirt junior forward Zach Budish was in Chicago to announce the Hockey City Classic where the Gophers will play Wisconsin and Notre Dame will play Miami February 17th, 2013 as part of a college hockey doubleheader outdoors at Soldier Field. Afterward, everyone broke off to take pictures and shake hands and coincidentally Matt Doherty, the actor who played Les Averman in the three "Mighty Ducks" movies was there.

The photo in question is after the jump (via @HkyCityClassic). 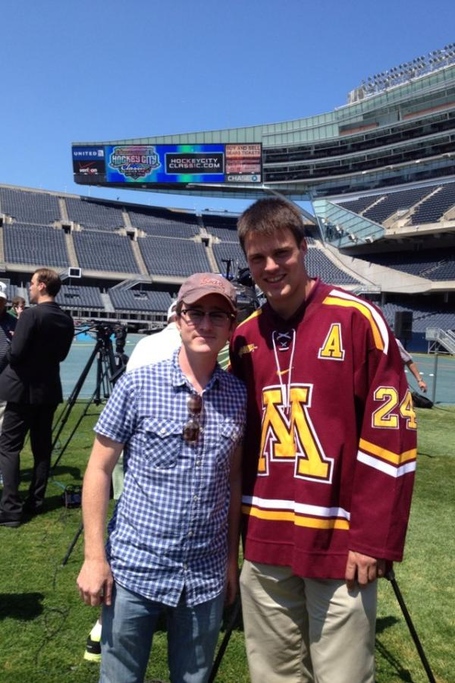 Doherty is dwarfed by the 6'3", 214 Budish but that's okay. While the Edina native gets to wear the "M" for another year, he doesn't have a Junior Goodwill Games gold medal and wins over the Hawks and Eden Hall varsity team in his resume. And who doesn't?

For more on the Hockey City Classic, go to www.hockeycityclassic.com. You can also follow them on Twitterand Facebook. Tickets to the event go on sale October 1st.