Share All sharing options for: ESPN's Marvel-ous NBA Preview And The Timberwolves

As a part of their 2010-11 NBA preview, ESPN teamed up with the folks from Marvel Comics to do a representation of each of the league's 30 teams. Now, generally access to these requires you to have an Insider account with ESPN.com, or a subscription to their magazine, but we've managed to snag permission to use one of them here on the site for your viewing pleasure.

The Timberwolves, according to ESPN. . .and, well, basically everybody else. . .don't have a lot to look forward to, but the question that the magazine asks about the Wolves is a simple one: Will the Iceman cometh? 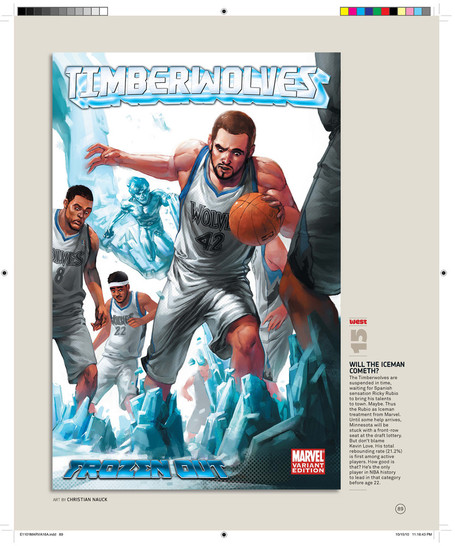 In case you're having trouble reading the text, here's what it says:

The Timberwolves are suspended in time, waiting for Spanish sensation Ricky Rubio to bring his talents to town. Maybe. Thus the Rubio as Iceman treatment from Marvel. Until some help arrives, Minnesota will be stuck with a front-row seat at the draft lottery. But don't blame Kevin Love. His total rebounding rate (21.2%) is first among active players. How good is that? He's the only player in NBA history to lead in that category before age 22.

Hopefully the Wolves can rise about the low expectations that ESPN has for them.

Thanks again to the folks at ESPN for letting us use their Timberwolves Marvel comic here on the site.