For the best Timberwolves coverage on the web, please visit Canis Hoopus.

The Timberwolves have ratcheted up their advertising this season, creating the atmosphere of a low-expectation, high fun team. For example, in the River Center parking ramp across from the Xcel Energy Center, there are quite a few ads; such as one that reads "We aren't rebuilding, we're re-re-re-rebuilding," and another that lists the players names as "alternatives for 'the big Bosnian guy who gets all the rebounds'."

There was an "in-depth investigation" into the failed high five attempt after a missed free throw earlier this year:

It is good to see the team not taking itself too seriously as they march through what can only be described as a painful season. Following that mantra, the Wolves have taken it up a notch in a campaign to make Center Kevin Love an All-Star reserve. This commercial was released today, and believe it or not, a real cologne and lotion to go with it:

Doubt the product is real? 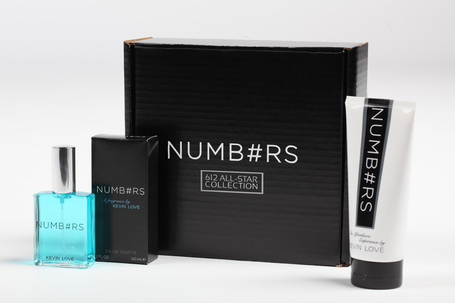 There are more empty seats at Target Center on any given night than there are full ones, but the Wolves have found a way to stay engaged with both their hard core fans, and the casual Minnesota sports fan. The fun won't always sell tickets, and the Wolves will need to start winning at some point. Until then, they at least have this hockey writer's attention. Does he have the numbers? You tell us.

The numbers look good to me. Need more proof? Check out the  612 All Star website.