Kevin Love Has A Bobblehead, But When Can Fans Get It?

Share All sharing options for: Kevin Love Has A Bobblehead, But When Can Fans Get It?

The brightest spot for the Minnesota Timberwolves this season is undoubtedly the All-Star season power forward Kevin Love is having. Quite simply, Love averaging 21.4 points and 15.6 rebounds while shooting 44 percent from the field is astounding.

The second brightest spot for the Timberwolves this season might be Love's return to the lovely social network known as Twitter. Love returned to Twitter about a month ago, saying simply "it was about time" and ever since he's been keeping his fans interested.

See, last season Love was having a breakout Twitter career before abruptly shutting his account down after tweeting the news that former Wolves coach Kevin McHale had been fired prior to any sort of official announcement.

On Wednesday, Love decided to debut something no one else had heard about -- though much less controversial than the McHale news -- tweeting a picture of his new bobblehead. Love was pretty impressed with the rendition, noting on Twitter "They even got the "Color Me Bad" facial hair right lol."

(picture after the jump) 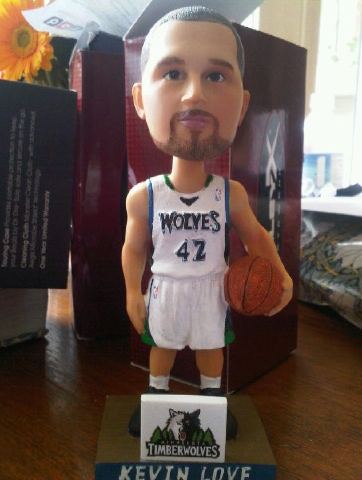 As nice as the bobblehead is, the Timberwolves don't currently have a 'Kevin Love Bobblehead Night' listed on their promotional schedule. There is a Crunch bobblehead giveaway scheduled for February 25 during the mascot's birthday celebration, but that bobblehead doesn't look nearly as life like as the Love bobblehead.

Hopefully there's an announcement soon as Kevin Love bobblehead night might be the next must-see game for the Wolves, especially if they continue this (two-game) win streak!