Share All sharing options for: Kevin Love Should Have Been A 2011 NBA All-Star Reserve According To TNT Voters

Of course, this won’t be any consolation to the Love fans in Minnesota — and beyond — but TNT had a poll on their pre-game show that allowed fans to text in their votes as to which players were the biggest snubs when it came to the NBA’s announcement of All-Star reserves tonight. 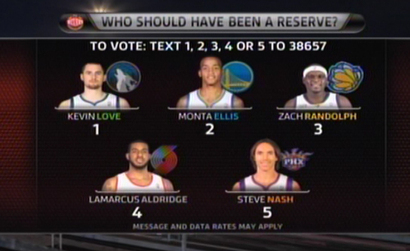 This should come as no surprise, but Love was the overwhelming favorite with 43.6 percent of the vote.

Aldridge finished second in the fan voting with 22.3 percent, Ellis was in third with 16.5 percent, Nash was in fourth with 15.0 percent and Zach Randolph was last with just 2.5 percent of the vote. 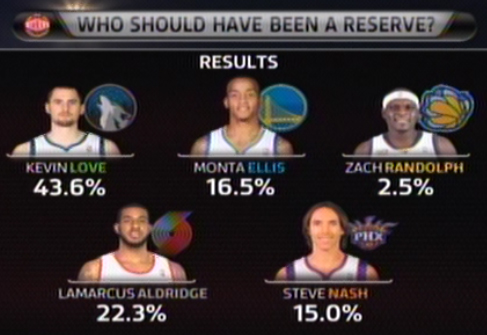 Does this prove Kevin Love was snubbed when it comes to 2011 NBA All-Star reserves?