How Much Better Is Kevin Love Than His Timberwolves Teammates?

Share All sharing options for: How Much Better Is Kevin Love Than His Timberwolves Teammates?

The Minnesota Timberwolves weren't great last season which is probably how they achieved the dubious honor of having the worst record in the league and therefore the best chance at winning the NBA Draft Lottery. However, Kevin Love was -- as Wolves' fans should expect -- head and shoulders above the rest of his teammates when it came to helping Minnesota win games.

That shouldn't surprise anyone who tuned into Fox Sports North or NBA League Pass or any other media format that made it possible  to watch the worst team in the NBA this season, but if it does? Well, frankly, it shouldn't.

The 2010-11 Minnesota Timberwolves had only two players that played up to average standards in the NBA this season with Love being one and Luke Ridnour being the other. That surprised me too, but at least it means maybe Ricky Rubio isn't as important to this franchise as it sometimes has seemed in the past.

This information came to SB Nation Minnesota by way Andres Alvarez posted his analysis of the Wolves' season over at Opposing Views and, while it was particularly numbers-heavy, it did allow us to post the pretty graph seen after the jump. 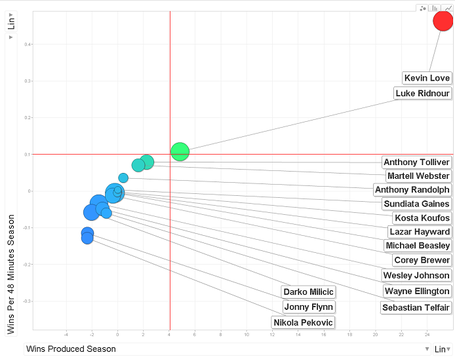 Though it seems quite obvious that Love stood out just looking at the picture, Alvarez explains the graph to all of the non-stat nerds in the building with this summary:

That's a player's Wins Produced vs. their Wins Produced per 48 minutes. If a player is in the top right it means they're at least as productive as an average starter that played 2000 minutes. We notice Kevin Love is amazing by this standard, Ridnour was about spot on average and the rest of the team was terrible.