The 2011 NBA Draft will take place following the upcoming Draft Lottery (ESPN, 7:30 p.m. CT) and potential first round pick Kyrie Irving has decided to throw a neat little wrinkle into the event by showing up with his agent.

Irivng,a freshman out out Duke University, is currently projected to go to the Minnesota Timberwolves according to most NBA mock drafts, but that could all change if the Wolves annual lottery luck doesn't change.

Irving has ties to New Jersey, where the lottery is held, as he attended high school at St. Patrick's in Elizabeth, NJ. Still, it's quite the statement to be making by showing up the lottery as most believe it's the first time that a top player has decided to attend the event that's been happening annually since 1985.

The NBA's official Twitter account captured a picture of the momentous occasion while he looks to be talking with Toronto Raptors GM Bryan Colangelo. 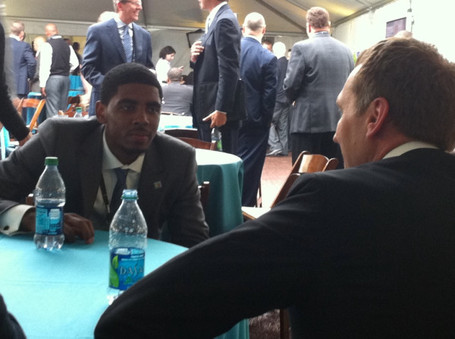