The Minnesota Timberwolves lost to the Golden State Warriors on Sunday evening as the NBA's regular season comes to a close. The most interesting thing to happen at the game probably wasn't on the court, however, as there was a famous fan in attendance.

Igor Vovkovinskiy attended Sunday's game at the Target Center as a guest of the Wolves and, while the name probably isn't familiar to 99 percent of the people reading this, he's probably better known as America's tallest man.

It'd seem that wouldn't be the biggest deal at an NBA game considering nearly everyone is tall, but the picture of the 7-foot-8 Vovkovinskiy alongside 7-footer Nikola Pekovic pregame? Well, have a look for yourself below (courtesy of the Timberwolves PR department). 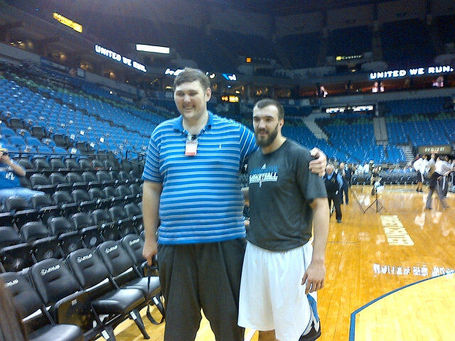 Rarely has Pek ever looked as unintimidating as he does standing next to America's tallest man.

For more on the Minnesota Timberwolves, check out Canis Hoopus. You can also check out professional basketball news from around the league over at SB Nation's NBA page.