Ricky Rubio signed with the adidas shoe company last week with contract terms that will likely make him the brand's third-highest compensated NBA player, trailing only Derrick Rose and Dwight Howard in that department.

The deal apparently hasn't gone into full effect for the Spanish playmaker and future savior of the Minnesota Timberwolves, however. Or, if it has, Rubio recently violated a cardinal sin by wearing a shirt sporting the Nike logo around the Twin Cities. 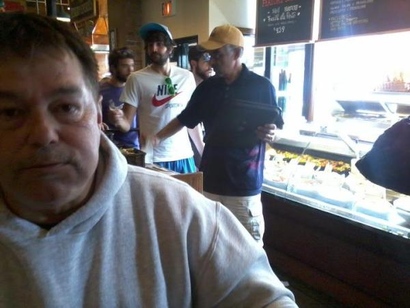 The above image, posted on Thursday evening by the wonderful folks over at Canis Hoopus, probably isn't what the adidas reps were hoping to see when Rubio agreed to the deal with Nike's competitors last week.

There's a good chance the next time that Rubio is seen in public, he'll be decked out in full adidas gear -- and maybe even wearing the glasses everyone seemed to love when he was spotted at a Minnesota Lynx game last weekend.

For more on Ricky Rubio and the Minnesota Timberwolves, check out Canis Hoopus, SB Nation's home for the Wolves. More news and analysis on the NBA in general can be found over at SB Nation's dedicated NBA hub.