Chart: Two Timberwolves Worst In The NBA From Certain Spots On The Court

Share All sharing options for: Chart: Two Timberwolves Worst In The NBA From Certain Spots On The Court

The Minnesota Timberwolves struggled to a 26-40 finish this past season. Most people will point to crucial injuries wearing down the squad that was on the outskirts of the playoff picture for most of the season. All but two Timberwolves players missed at least eleven of the lockout-shortened 66-game season.

However, other statistics back up the fact that the Wolves weren't quite ready for prime time. The Wolves were among the worst in the league when it came to shooting. They ranked 27th out of 30 NBA teams in overall field goal percentage and 23rd from beyond the arc--a problem since only five teams shot more threes than Minnesota.

Court Vision, a really interesting website that evaluates basketball performance with the help of visual and spatial analytics, just released an interesting chart that breaks down the worst shooters in the NBA from specific areas of the court. They divided up the floor into 17 distinct shooting areas (eight around the three-point line, eight midrange areas, and one from close range) and crunched the numbers to find out who was the worst in the league from each spot. Of course they put minimum attempts as qualifiers so somebody who went 0-for-3 or something didn't win by default.

Unfortunately for the Timberwolves, two members of the team earned the dubious distinction of being the worst in the league from certain spots on the floor. Both Wesley Johnson and Ricky Rubio showed up on the chart.

Johnson shot a woeful 23% from beyond the arc in the left corner. This isn't terribly surprising since Wes constantly looks like he's about to cry on his way back down the court after his latest missed shot. Note to Kevin Love: if Wes Johnson is shooting from the left corner, it's time to crash the boards and pad your rebounding stats.

On the other hand, Rubio's appearance on the court comes as a bit of a shock. Not because Rubio is a highly regarded shooter--far from it--but the fact that the Spanish point guard is the worst in the league at finishing near the basket. Most Timberwolves fans wouldn't bat an eyelash at seeing the streak-shooting Rubio show up from the perimiter, but seeing that Rubio shot only 41% from point-blank range is alarming. Court Vision agrees:

Rubio has trouble finishing. There's no doubt that Ricky Rubio is going to be very good in the NBA (as long as his body holds up). But, great NBA point guards like Rose, CP3, and even Rondo are very effective close range scorers; this is a skill that Rubio needs to work on; he is currently the least effective close range shooter in the league.

Timberwolves fans can take solace that a lot of very good players also made the list, such as Russell Westbrook, Danny Granger, Amare Stoudemire (16% from the right elbow?! Really?!), and Andrew Bynum. The full chart is below. 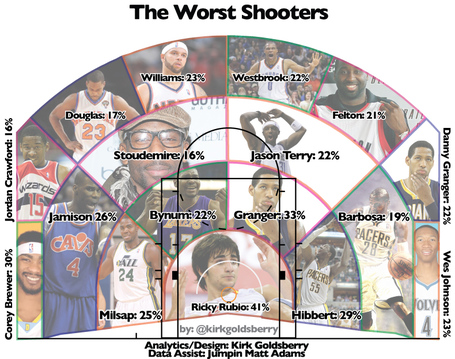