Minnesota needs to place a priority on improving their interior defense with the 18th pick in the upcoming NBA draft.

As the NBA draft nears, now just over one month away from its June 28th date, the Minnesota Timberwolves should consider focusing on a "big" flaw on the defensive end with the 18th pick in the first round.

The Wolves, coming off of a promising 2011-12 campaign that saw them finish 26-40, appear to be ready to turn the corner and earn a spot in the playoffs in the 2012-13 season. Of course that push is contingent on the overall health of the roster (especially the left knee of Ricky Rubio) and a solid offseason for the team.

The success of this offseason must begin with a successful draft for the Wolves. Though everyone and their grandmothers seem to want Minnesota to grab a shooting guard who can hit from outside, their biggest need is improving their interior defense.

Minnesota was horrendous at defending the paint last season. They ranked 25th in the league in blocks per game, with seldom-used Anthony Randolph leading the squad with just one block per appearance. The Wolves also relinquished 44.1 points allowed in the paint per contest, good for fifth worst in the association. If you are wondering how important that stat is, 13 of the top 14 teams in the NBA this year at defending the key made the playoffs.

The Timberwolves starting-front court of Kevin Love (recently named 2nd-team All NBA) and Nikola Pekovic, while effective on the offensive end, lacks the size (Love listed at 6'10", Pek a generous 6'11") and athletic ability to block/alter shots and defend longer, quicker post players down low. Love and Pekovic combined for just 1.2 blocks per game last season, allowing teams to get to the rim at will with no real consequence.

While Pek and Love are two of the team's most popular players, the two together on the court at the same time create a liability in the paint on the defensive end. They showed their defensive deficiencies against pairs of talented big men, like Pau Gasol and Andrew Bynum of the Los Angeles Lakers. Gasol and Bynum combined to average a shade under 37 points in their four contests with the Wolves and the Lakers swept the season series.

Minnesota needs to utilize their first-round draft pick to get longer and more athletic on the front line. There will be options available at the #18 pick to fill this hole. Syracuse seven-footer Fab Melo averaged 2.9 blocks a game for the Orangemen while Big-Ten product Meyers Leonard stands at 7'1" and averaged just under two blocks a game during his Sophomore year at Illinois. Leonard became the focal point of the Illini offense as the season progressed, averaging 17.4 points over his team's last five contests of the season. 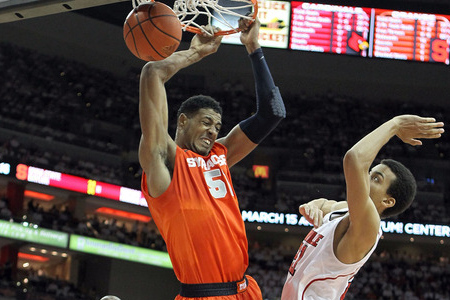 Fab Melo would greatly improve Minnesota's defense of the paint.

Big men such as Melo or Leonard would provide a much-needed boost to the interior defense and would deter wings cutting to the basket by providing someone capable of protecting the rim. While both prospects have a lot of room for improvement on the offensive end, they would surely learn quickly from playing next to one of the most skilled big men in the game in Love.

Pekovic could possibly be moved back to the bench if Minnesota selected a big man in the first round. The role better suits his offensive game along with the energy he can bring to the table coming in as a reserve.

Shooting guard is also certainly a gaping hole for the Wolves, as they lack a true-two guard capable of being a NBA starter. However, it is not as bad as it may seem from the perimeter. Minnesota averaged over seven three-pointers a game, good for eleventh-best in the league. Also, with a healthy Rubio and a dominating offensive presence like Love on the court, a spot-up shooter would seem to suffice for the Wolves' offense. Pure shooters are something that can be addressed in free agency.

Shooting options for Minnesota in this year's free-agent pool include O.J. Mayo, Nick Young, and Jodie Meeks. Mayo has been a target for Minnesota for some time now, though he should require a high price tag. Young has suffered from off-the-court issues and inconsistent play, but his staggering 51.5% shooting from beyond the arc for theClippers this postseason cannot be ignored.

Another interesting player could be an aging Ray Allen. Allen shot 45% from long distance in Boston during the regular season, though injuries have hampered him thus far in the postseason. If you can get a healthy Allen at a reasonable price, it would be tough to pass on the future Hall of Famer.

If the Timberwolves' front office can pass on sexy-scoring guards like Washington's Terrance Ross and Vanderbilt's John Jenkins in the draft, and instead address the need by picking up a free agent that can contribute immediately, they should be able to use their pick to vastly improve a defense that allowed 100.1 points a game in the 2011-12 season and take a huge step toward becoming a playoff team in 2012-13.