So, the folks from ESPN were discussing Most Valuable Players in the major sports, and noted how both the National League MVP in Major League Baseball and the National Football League MVP could both play for teams in the same state. In this case, the state would be Wisconsin, with Ryan Braun of the Milwaukee Brewers having been named the NL's Most Valuable Player yesterday, and Green Bay Packers' quarterback Aaron Rodgers seemingly on the path to winning the award in the NFL, barring injury.

They expressed this in visual form as well. Only one small problem. 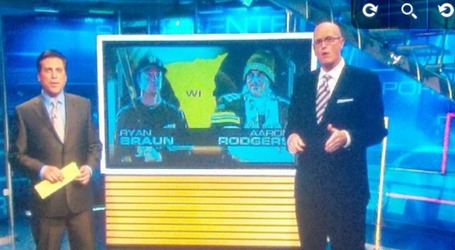 See that state they're showing there? The yellow one with the big "WI" for Wisconsin in the middle of it?

Oh, well, it's easy to understand how they could get them confused. They are, after all, the worldwide leader.