Harmon Killebrew, one of the first great Minnesota Twins after moving with the franchise from its earlier days as the Washington Senators, announced earlier today that he's entering hospice care and ending his battle with cancer. This is terrible news for baseball fans, especially those of us located in Twins Territory, considering Hammerin' Harmon played 20 years with the franchise and had his No. 3 jersey retired by the team.

The former first baseman, third baseman and leftfielder will also be remembered for winning the American League's 1969 Most Valuable Player award, the 1971 Lou Gehrig Memorial Award (given to players who best exemplify his character and integrity both on and off the field) and his 1984 induction into the Baseball Hall of Fame.

Following his baseball career, the legend also created the Harmon Killebrew Foundation, dedicated to enriching the quality of life by promoting positive and healthful participation in sports, specifically baseball, by partnering with other 501(c)3 organizations to raise funds for their missions of promoting mental & physical health, education, self-sufficiency and community service.

At Friday's Twins game against the Toronto Blue Jays, the Twins organization made a symbolic tribute to Killebrew, hanging a No. 3 jersey in the dugout at Target Field. 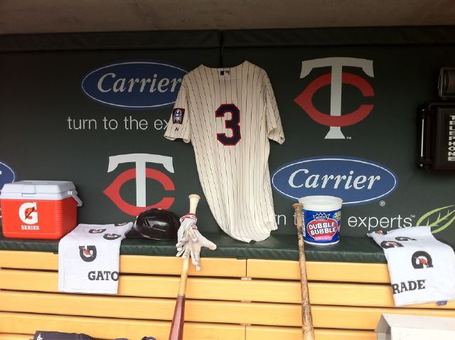