Of Power and Speed: Understanding the Skills of Ben Revere

Minnesota Twins left fielder Ben Revere can be a polarizing figure in some circles, but everyone can agree on one thing: his speed will play a major role in how his season (and career) will go.

Share All sharing options for: Of Power and Speed: Understanding the Skills of Ben Revere

One of the big stories of Minnesota Twins Spring Training this year has been Ben Revere. Nobody is surprised when someone talks about how little power Revere has, but whether talking about his five home runs in 1,654 career minor league plate appearances or one bring up the fact that only 11 percent of his Major League hits have gone for extra bases (none of which have been home runs), the best way to illustrate just how little power Revere has is to show you his spray chart.

In the entirety of Revere's 117 games in 2011, just six hits made it to the deep area of a ballpark. He won't turn 24 until May, so he's clearly still developing, but at some point one just has to believe that power isn't going to develop. When he was initially drafted, scouts said the same thing about Revere as they'd say about Aaron Hicks a year later: he'd develop power as he aged and his body filled out.

Instead, Revere put together a minor league career that bested the triple slash of Kenny Lofton (who hit .300/.370/.379). He developed an affinity for putting the ball in play, and putting it on the ground in particular as 2011 showed when nearly 70 percent of his balls in play were grounders. And instead of developing bulk for power which could have slowed him down, all of those ground balls have actually been playing in Revere's favor.

Already known for his speed (his range in center field actually grades out a bit better than Denard Span's since the start of 2010), 26 of Revere's 106 singles last season came off of infield hits. Four of those 26 infield hits were bunt singles. Last, of his 106 singles, 56 came on ground balls, which means that of those 56 ground ball singles 26 of them came off infield hits (46 percent). That's astounding.

Looking at Revere's spray chart above, a couple of things stand out. When he gets it out of the infield, he's very good at shooting balls into center field and he's good at going the other way to left, in spite of being a left-handed hitter. Second, it's difficult to tell the forest for the trees in the infield. If we break it down into zones, it becomes a bit easier to see Revere's batted ball tendencies. 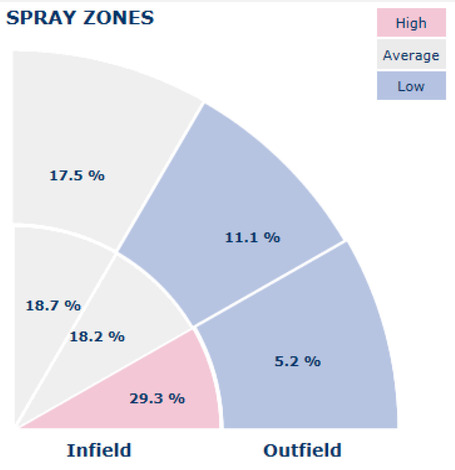 (Courtesy of Inside Edge)

What happens when Revere actually pulls the ball is that his ground ball rate actually jumps to nearly 90 percent. Because his speed is largely negated in these cases (bunts perhaps excepting), his production drops off dramatically. Last year, on balls in play to right field Revere hit just .178 and slugged .211. But when he goes to center or to left and challenges the range of the infielders, and gives himself an extra couple of steps, we see results: a .320 batting average on balls in play to center field and .338 to left.

When people talk about how little power Ben Revere has, it's usually not in a positive context. To be certain, players with Revere's skill set live on the margins. Lofton survived thanks to his defensive reputation, but he also stole a lot of bases, got on base at a very good rate and, interestingly, developed a little bit of power. While Lofton is a good minor league comp for Revere, a better Major League comp might be Juan Pierre.

For every Lofton and Pierre there are scores of other players with these skill sets who were unable to make the grade. Revere can succeed, but part of that is understanding exactly what he does well and allowing him to do those things. Don't try to teach him to pull the ball, because he's awful when he does. Don't try to teach him to elevate the ball, because oufields will be playing him so shallow that they'd become automatic outs.

Let Revere hit the ball on the ground, and continuallly teach him the nuances of smart base running and reading pitchers. At the plate, if anything, get him to develop his plate discipline, strike zone judgement and pitch recognition, so that he can make the most of his contact skills and take more walks.

Oh, and if he can stay fast, that would also be good. His blazing speed is what makes this all possible.

For more on the Minnesota Twins, check out Twinkie Town. You can also head over to SB Nation's main MLB hub at Baseball Nation.

Twins Spring Training: Standouts, Injuries And Everything Else From The Preseason