NFL free agency kicked off on Tuesday afternoon and, after an awful 2011 season, fans of the Minnesota Vikings were hoping their team would be big time players when it came to the 2012 free agent class. Instead, however, the Vikings' only reported moves in the first two hours of free agency include re-signing defensive tackle Letroy Guion and deciding not to lock up Kenny Onatolu and Lorenzo Booker before they hit the open market.

That hasn't made the fans of the team very happy, as our own Eric Thompson posted a visualization of what the majority of Minnesota's fans currently look like through the first few hours of the new NFL season. 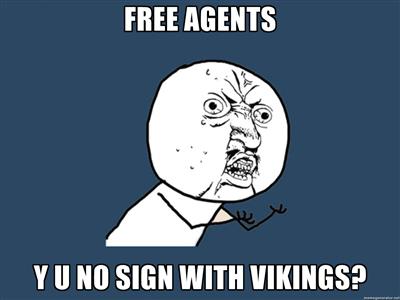 Hopefully it gets more exciting in the coming days, but it probably isn't worth holding anyone's breath.