Where The Wild Fit In The NHL Standings

For all of your Minnesota Wild discussion and fun, visit Hockey Wilderness.

Share All sharing options for: Where The Wild Fit In The NHL Standings

Sitting at 8-6-2, the Wild are, according to NHL rules, above .500. However, with the two overtime losses still being losses, they sit at the even mark almost a quarter of the way through the season. Would you like to know how many barely .500 teams make the playoffs? In an off year, maybe one, and that team is usually in the East, not the ultimately more competitive West.

With 18 points, the Wild sit in second place in the Northwest division, four points back from the leading Vancouver Canucks. The other three teams in the division are having horrible starts to the season, and cannot be counted on to continue the trend.

Calgary has Jarome Iginla and Mikka Kiprusoff. Once they find their stride, they will be hard to stop. Colorado is nearly unchanged from last season, and is a young team. Once their nerves settle a bit, they will once again challenge for the division title.

The point in hockey, however, is to make the playoffs, and the Wild can do so without winning the division. As of this writing, they are in tenth place, tied with two other teams with 18 points, but losing the tie breakers to San Jose and Columbus. An outside observer may say "They are only six points out of first place in the West. That's only three games." Sure it is, in the same way that Big Foot is "just a truck." 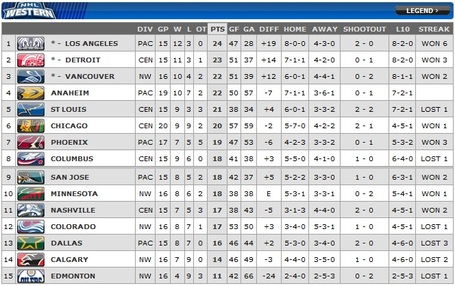 Six points behind the Kings may as well be 100 at this point in the season, with the way the teams are playing. Little changes in the NHL standings after November, as trends play themselves out and teams become what they are going to become. Can it happen? Sure, but there is little to no point in getting your hopes up for it.

To further drive the point home, the Wild sit 16th in the league.  In comparison, they finished with the 22nd best record in the league last season. Improvement? Sure. Progress? Not really, no. It is not the top 16 teams in the league that go to the playoffs, it is the top eight in each conference. Besides, no one would dream that the Wild would actually compare to the top teams in the East right now, would they? Sure, they beat the Capitals, but could they do it in four out of seven? Not a chance. 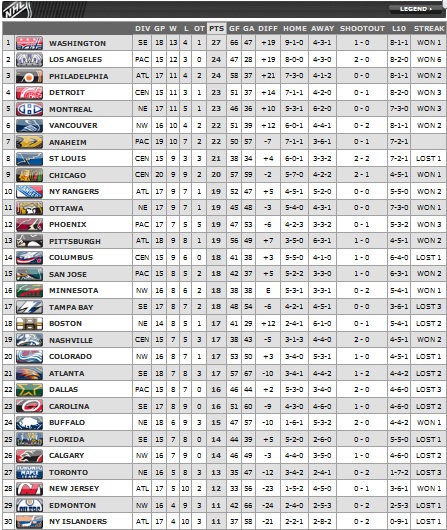 The Wild cannot put a consistent effort together from period to period most nights, let alone game to game. Embarrassing losses followed by impressive victories. Until they find a high level of consistent play, they will forever be doomed to remain in the large group of mediocrity that makes up the middle of the pack. What does being mediocre get you in the NHL? A great tee time, another mid round draft pick, and an extra helping of mediocre.