A Week Later, Wild Gain No Ground In Standings

For all of your Wild needs, please visit Hockey Wilderness.

Share All sharing options for: A Week Later, Wild Gain No Ground In Standings

Very little changes in the Western Conference standings as the year progresses. It is an uber competitive conference, with the final three playoff spots generally decided by less than four points.

Now coach, convince your team of that.

Let's look at where the Wild sit in their various peer groups.

The only thing that changed this week is that the Wild pulled one point closer the Northwest lead. However, the leader of the league changed. Colorado leap frogged the Wild and the Canucks and pulled into first place. The Wild do have a game in hand on the both teams, but it is only a 50/50 shot that the Wild will win that game. A win only moves them into second place, not first. Second place in the Northwest is not likely to earn a playoff spot. 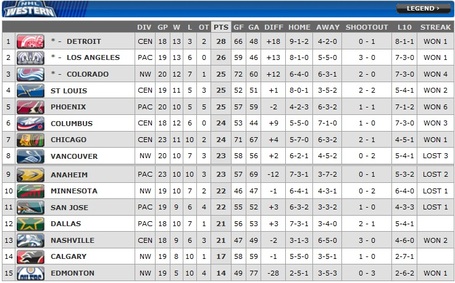 Last week, the Wild were in tenth place in the West, out of the playoffs due to the tiebreakers in place in the NHL. This week, they are in... tenth place. If the season ended today, they would miss the playoffs for the third year in a row, and they would do so by one point. Those second periods are starting to look more and more important now, aren't they? 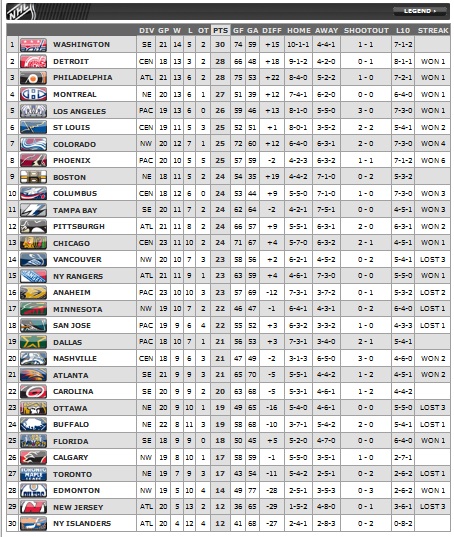 Remember, little changes in the NHL after Thanksgiving. Couple with the fact that very little changes in the West to begin with, and the Wild are looking at once again flirting with a playoff spot, yet not making it. That is the "on paper" analysis. As the cliche goes, the games are played on the ice, and the Wild certainly could buck the trend and ride a hot streak into the thick of things.

If they are going to do so, they need to do it soon. As Keith Urban says:

And days go by...
I can feel 'em flyin'
Like a hand out the window in the wind.
The cars go by...
Yeah it's all we've been given,
So you better start livin' right now
'Cause days go by...

Before you know it, it will be April, and the Wild will be on the outside looking in yet again.