Where's Waldo? Finding The Wild In The Standings

For the best Minnesota Wild coverage on the web, visit Hockey Wilderness.

Share All sharing options for: Where's Waldo? Finding The Wild In The Standings

The Minnesota Wild know they play in the Western Conference. They also know that of the two sides of the NHL coin, the West is not the place to fall into a long funk, for fear that you will never recover from it. Go on a seven game slide, you will miss the playoffs, it is almost that cut and dry.

With the wins being intermixed, the Wild have not hit that seven game slide. However, with poor play and lack of superhuman goaltending, the Wild are headed for a slide sooner, not later. Right now, however, they cling to the fact that they are still holding tight in the playoff race, despite the fact that the reality of the situation says otherwise.

Yes, sports fans, sometimes, what the math says, and what is reality are two different things. All depends on your perspective.

Get out your scavenger hunting abilities as we go on a quest to find the Minnesota Wild in the standings.

In the Northwest, the Wild find themselves trapped in the third position, just three points back. Keep in mind, this is what is referred to as one of the weakest divisions in hockey. Being in third place in one of the worst divisions in the league is not a good place to be.

Now, the Northwest is still one of the roughest, most physical in the league, and every win is a bruising, pain filled experience. No one said it was an easy division, just a weak one. 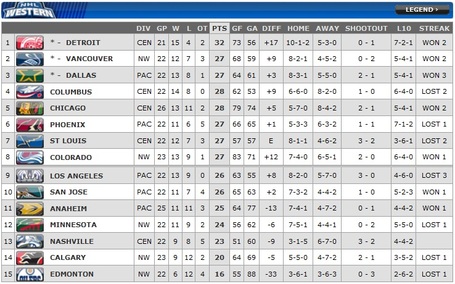 If a team is in third place in a weak division, where does that put them in the playoff race? Outside of it, that's where.Those same three points are the difference between eighth and twelfth.They are three huge points, and three the Wild could easily have if they wouldn't be... well, themselves.

Three points doesn't look like much, right? Right. It's a win and an over time loss. Still in contention, right? No. Two weeks ago they were tied with the #8 team. A week ago, they were just one point back. Now they are three points back. Mathematically, the Wild are still close, absolutely. Realistically? They are headed backwards.

No one wants to admit in November that they are done. There are still too many hockey games to play to admit defeat this early. However, at some point, the realism needs to over take the optimism, and decisions need to be made. When that point is, only one man can decide. 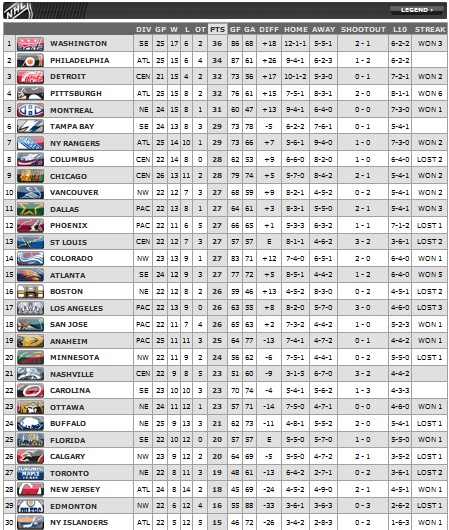 For the sake of comparison, we always look at where the Wild fit in the overall standings. Where is Waldo? Ah, there he is. Number 20. The twentieth best team in the league. Does that sound better than the 11th worst? Who knows. Either way, it means they are nowhere near being where they need to be.

There is a word that describes teams who finish twentieth in the league. Golfers? No, but it fits. The word we are thinking of is mentioned too many times in relation to the Wild, and it fits well in a whisper: