For the best Wild coverage on the Web, visit Hockey Wilderness.

Every week, we look at the NHL standings, and how the Wild fit in. I'm starting to think we should just take a picture of said standings, post it once a week and write, "Yep, still the same" under it. You see, I told you recently that nothing changes in the NHL after Thanksgiving. After four or so weeks, are you starting to get that I wasn't kidding?

If not, here are the standings. You can compare them to where the Wild were a week ago, two weeks ago, three weeks ago, and four weeks ago. There is only one direction the Wild have moved. Down. Long stretches of bad hockey will do that to you.

So where do they fit this week? Let's find out.

In the weakest division in the league (yeah, I said it), the Wild find themselves in a familiar position. Third.

The good news? They widened the gap between them and last place. Hey, when things are going the way they are, you latch onto anything, right? Calgary and Edmonton are considered absolute jokes in the NHL right now. So why then, just three points ahead of them, are the Wild not in that same grouping?

They are. Wild fans just won't admit it.

Moving on to the playoff race, something that is merely a pipe dream at this point, we find the Wild far outside the bubble. 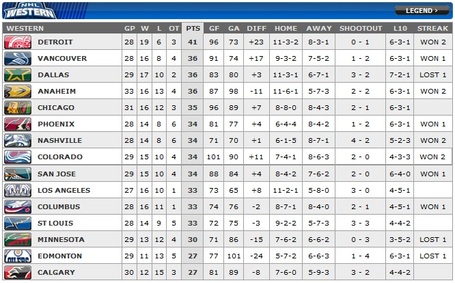 Here again, nothing has changed, except the gap between the Wild and the bottom. Four points separate the Wild from the eight spot, and three separate them from last place. Jumping five teams is not going to be nearly as easy as falling below two. Not that the goal is to finish last, just pointing out which is more likely.

It would take an amazing run and some amazing collapses for the Wild to move up. Have we seen it happen yet this year? The answer to that should be obvious.

Finishing up, we look at where the Wild fit into the draft picture. 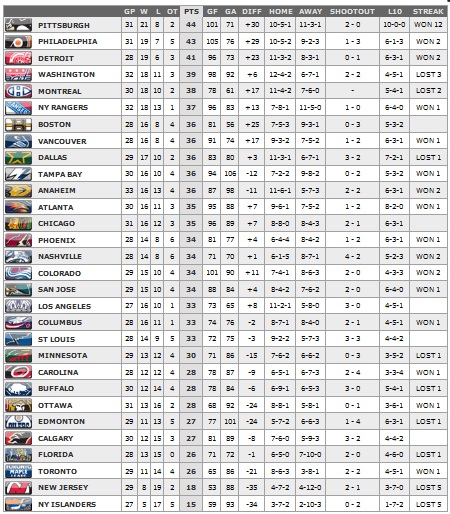 The East continues to be absolutely terrible. Four teams in the East fall below the worst team in the West. Seven of the bottom ten teams come from the East. Too many three-point games in the West for their own good. Seems in the East you either have it, or you don't, and in the West, you really feel like you have it, when you probably don't.

Wouldn't it be nice to have things a bit more cut and dry?