NHL Standings: Wild Adjust to Life in the Cellar

For the best Wild coverage on the net, please visit Hockey Wilderness.

Share All sharing options for: NHL Standings: Wild Adjust to Life in the Cellar

When things are bad, good teams respond with increased effort and they overcome the obstacle. Teams that aren't so good accept their fate and simply begin decorating the cellar. The mood around the Wild is one of hiring one of the people from HGTV, more than it is about planning parades.

At this point it would take a turnaround, the likes of which pro sports does not often see, for the Wild to make the playoffs. Signs point to trading veterans with expiring deals for picks or prospects rather than trading for someone to turn things around. Depending on the long term plan, a losing season may not be such a bad idea. Although, I'm sure Craig Leipold figures he could lose for a lot less money than he is paying right now.

Let's take our weekly gander at the standings and see just how bad it really is.

Last week, if you remember, we discussed the fact that the lead for the division leader was just six points. Only three games. It was doable, right? Well, yeah, it was, but for the Avalanche, not for the Wild. After another week, the Wild are now ten points back of the leaders, and eight points behind second place. They are, once again, just a handful of points from last place.

Turning our attention to the big picture, since the Wild are unlikely to catch the Avs and Canucks for the division crown, we look at the playoff race. 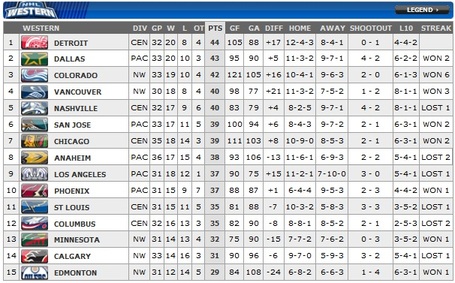 How's that look for ya? Yeah, not good. Once again, the Wild find themselves much closer to the bottom than the top, with little hop of making the leap. Lat week, it was four points. This week, it is six points and a jump over five teams to make the playoffs. Unlikely, judging by the track they would have to take to get there. Impossible? Not even close. Likely? Eh, not really.

To round out our trip, we take a look at draft positioning, and the Wild's place in the NHL as a whole. 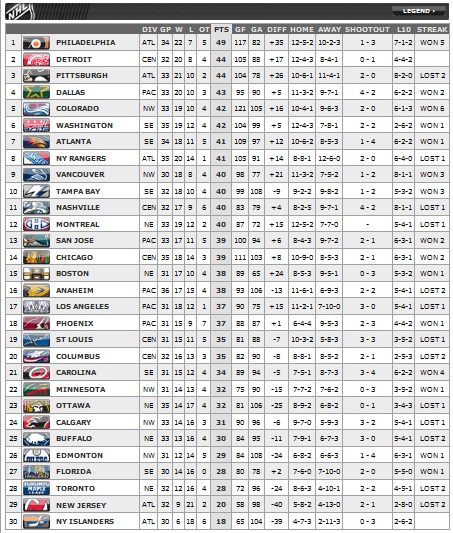 At 22nd, the Wild would pick... ninth. Exactly where they picked last year. Would be nice to see them either win or lose, rather than continue the up and down path, missing the playoffs, and missing the prime picks. No one wants to admit their goose is cooked, but when things look the way they look, no one wants to be the one who just won't admit it, either.

Maybe the Wild can find a spark, but they better hope the other teams lose theirs as well.